June 06, 2009
I had always prided myself on being an Individualist. Society, for me, had always been a waste of time, energy and faculties. And the good thing about my childhood was that my parents allowed me complete freedom to lead my life however I wished. I had and still have very few friends – and that too after having fully validated their intellectual pedigree and only after being satisfied that our mental frequencies match. I rarely leave my house except for going to my regular pub or for buying my stock of cigarettes. I have hardly ever been to any places of worship or tourist spots. Give me a choice between a crowd and the serenity of my home, I would always choose seclusion to the multitude. I prefer books to people, I prefer DVD to a Multiplex, I prefer listening to a good song or Churchill’s speeches rather than listen to the ramblings of societal elements.


But I am a liberal at heart, a tolerant fellow and although I have an utter disdain towards the motions of society, I accept their existence whole-heartedly. Unlike many communities out here, I am a firm believer in Democracy. I am a subscriber to what is commonly known as an individualistic worldview.

When I recently took a test of determining my level of “Individualism” vis-à-vis “Collectivism”, more than 80% of my answers were “Collectivist”. Surprising, isn’t it?

More surprising was the fact that several gregarious people, the typical societal elements, the herd – fell in the Individualistic category.

I realized later, the fallacy was in the topic itself.

The topic “I am” is an incorrect question for determining the degree of “Individualism” vis-à-vis “Collectivism”. And why should that be the case, one may very well ask. 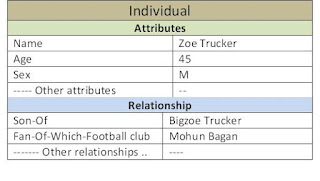 So essentially, I remain a 99% Individualist and the Masses remain the Collectivist. I have and shall continue to second the Bard in his disdain for the multitude.
musings