It is a phrase which has stuck like glue to my mind ever since I heard my professor saying it for the first time and then repeating it innumerable times. People used to laugh at it and I admit that even I did the same initially. But on deeper reflection I understood the rationale behind that phrase.


It requires a very high level of mental evolution to truly appreciate the significance of this phrase. To extend this concept further, we can think of a continuum - passion, compassion and dispassion. In the Vedic philosophy, these are the stages through which a human being would progress in the course of his life given the proper environmental setting and it also ties in neatly with a relatively modern concept like Maslow's Hierarchy of Needs. 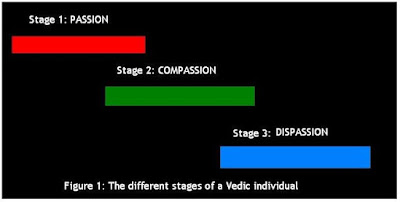 However, the boundaries between these stages are not properly defined and there is considerable overlap between these phases. Majority of the people in our society languish at the passion stage. For these people, compassion for other beings and for society at last comes at a much later stage, if at all it comes. Dispassion is the most difficult state to achieve. 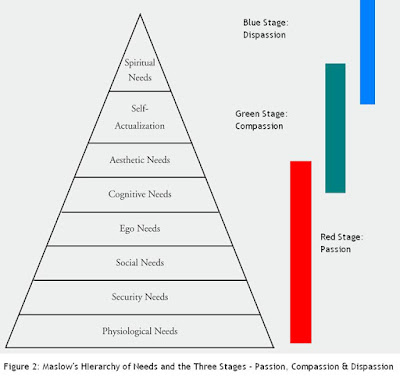 I have used the word dispassion for the want of a better word. Some people use the word ‘renunciation’ to convey the same meaning, but I am not particularly fond of that word, especially in this context as it conveys a sense of mysticism. Let me see if I can explain the concept in a different way. Passion ties in closely with Self - in this stage of one's life majority of one's actions are closely linked to the satisfaction of his desires, ambitions and goals. Even if things are done for other beings the motive is primarily linked to the individual's self-interest

Eventually, a stage is reached when people start thinking about other beings but for their sake. The collective becomes more important than the Individual and slowly he expands his Self to embrace all around him. A feeling of Oneness is a key aspect of this phase.

The third and final stage is dispassion - a state of complete duty-orientation. Neither passion nor compassion plays any role here. Duty becomes the fundamental premise on which all actions are based. Actions are performed primarily because they have to be performed in order to ensure harmony in the grander scheme of things. Consequences of actions are disassociated from the actions. A person has full control over his actions and must perform his duty with utmost sincerity and dedication. However, consequences of such actions are something which is not under his control. Innumerable factors influence the outcome of any such action and hence to anticipate possible outcomes is like playing a game of dice with a 1000-sided dice. Does it mean a person is not to have a goal? No, not at all. The goal is clearly embedded in the action that the individual performs which in turn is what his duties are based on. This is what I mean by dispassion. A beautiful imagery, in this regard, in the Bhagwad Gita which I find particularly apt is the following one:

"When, like the tortoise which withdraws its limbs on all sides, he withdraws his senses from the sense-objects, then his wisdom becomes steady."

In fact the last portion of Chapter 2, from verse 47 to the end, deals with these aspects - action, consequence, passion, dispassion and wisdom and its various intricacies.

Does it mean that the stage of passion is not as good as stage of compassion? By no means is that the case - none of the stages are good or bad - they just reflect different stages of mental evolution. A Brahmin, by definition (and not necessarily in the ritualistic sense of the term) is one who is in the phase of dispassion. But the question remains, how many people actually reach that last phase? In reality, it's few and far between.

Is it necessary to attain the last phase? For a modern-age work-in-progress Brahmin this question poses a great dilemma. However, on deeper reflection it will become apparent that there is no 'necessity' involved anywhere in the scheme of things - in fact the very question in itself is meaningless. If an individual is a true Brahmin (by his conduct and mental-makeup), his mind will automatically gravitate towards the stage of dispassion at some time or the other, after having crossed the stages of passion and compassion. In concept, it is a straight uncomplicated path but in practice it might be difficult to travel all the way.

That is all I have to say at this point in time. All I can say is - think about it.
musings