July 11, 2011
The demography of West Bengal is changing fast as it moves towards rapid Islamization, that too, of the fundamentalist jihadi kind. By 2050, Bengali Hindus would become extinct in Bangladesh  and a minority in West Bengal, similar to Kashmiri Hindu and Kashmiri Pandit families.

Purpose of this Study on West Bengal Demographics

West Bengal demographics in terms of religious affiliation, has changed significantly over the last few decades.

Muslims have grown faster than Hindus and hence the overall decade on decade population growth in West Bengal does not reflect the differences in the growth rate of Muslims, Hindus and other communities, which have maintained different trajectories.

The changing demographics due to rapid Islamization is affecting the way of life of Bengali Hindus to a great degree, and is also resulting in massive outflows of Bengali Hindus from West Bengal to other states in India or to other non-Islamic nations.

The purpose of this study is to estimate the religious demographics of West Bengal in the coming decades, and the possible impact it would have on Bengali Hindus.

As per 2001 West Bengal census data, among the total population of West Bengal, Hindus constitute 72.47%, Muslims 25.25% and others 2.28%. The growth rates, however, in the different religious communities have been different.

In the period 1951 to 2001, Hindus in West Bengal have grown at a compounded average decadal growth rate of 20%, Muslims at 26.56% and other communities at 27.7%. However, the decade on decade growth rate, has exhibited a downward trend for Hindus, whereas for Muslims it has stayed at the same level or increased marginally, and for other communities has gone up significantly.

The table below illustrates the historical religious demographic details of West Bengal from 1951 to2001. 2011 data is partially estimated in terms of Muslim population percentage, (marked in yellow) which is assumed to be 30% of the actual West Bengal population of 91 million.

The religion-wise decadal CAGR and expected growth rates are given below. A conservative estimate of the growth rates are calculated using a simple linear extrapolation, although the trajectory suggests a likely polynomial growth function. 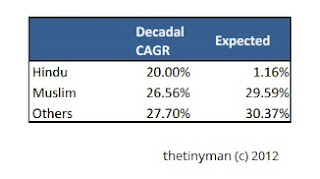 Using the above estimated growth rates and assuming that the rates stay the same decade on decade, we obtain the following results.

Conclusion
India is a secular nation and has no state religion.

Under normal circumstances, the growth of any religious community (including Islam) in West Bengal, would have been welcome, as, for any state to succeed economically, diversity of skilled population is essential.

However, the current Islamization of West Bengal is being undertaken by radical jihadi groups, mainly from Bangladesh, whose sole motto is to establish radical Islam in India at the cost of native Hindu Bengalis by destroying Hinduism. I have given a list of such vandalism/ riots by Jihadi Muslims at the end.

If things were to follow this course, West Bengali Hindus would soon become a migrant community similar to Kashmiri Hindus.

The result of this analysis should be very important to policy makers as they can base future policies with this demographic analysis in mind, and assess the definition of a minority community.

With this trajectory, B.D. would become 100% Islamic by 2050, as a conservative estimate.

After 2050, Bengali Hindu's would be forced to migrate to different parts of India and the world. Once W.B. crosses the 50% Islamic mark, the Islamization of the remaining 50% would be rapid, as is evident in other Islamic states/ nations.

This is something that Indian Policy makers need to reflect on and take into account while creating future policy decisions, otherwise Bengal Hindu way of life, as we know it, would come to extinction.

A PDF version of West Bengal Demographics is available at Scribd.

Below I present a small list of documented rise in intolerance by Muslim community in West Bengal spearheaded by radical Islamic Jihadis and fundamentalists.

For details of rising Islamic fundamentalism in West Bengal, I am preparing a detailed note.

That's it. Thank you for reading West Bengal Demographics Study. Please show your appreciation by sharing and/or leaving a comment.
current-affairs history