Book Review: The Mystery of Banking 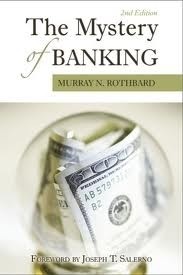 Author: Murray Rothbard
Publisher: Ludwig Von Mises Institute (1983)
This is perhaps one of the best books on banking I have ever read.

Prof Murray Rothbard (1926 -1995), who belonged to the Austrian school of economics who and helped define capitalist libertarianism, in this book, clearly explains the meaning and significance of money, the institution of banking and its dynamics and the inflationary evils of fractional reserves banking.

The first part of the book deals with the theoretical aspects of money and banking and includes topics like demand and supply of money, purchasing power of money, real money vs fiat money, the distinction between bailment and debt, the system of fractional reserves and all its associated pitfalls.

The second part deals withe historical aspects of the development of money and real life instances of inflationary evils of fractional reserves banking.

For those unaware of the philosophy of the Austrian school and laissez-faire ideas, some of the ideas and conclusions in this book might come as a shock. His labeling of banks as "counterfeiters" of money, might make some people uncomfortable initially. But thinking through the text and analyzing its implications, would probably make one realize that money and banking as portrayed in traditional economics text books is far removed from the rather unpleasant and fraudulent reality of present day markets in the context of interventionist state.

A must read for believers in absolute free market economics!
miscellaneous