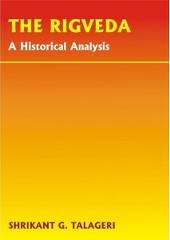 In this book, Shrikant Talageri conducts an examination of the Rig Veda, the oldest literary document of the Indians, in order to explore the history of the people who called themselves "Aryans" and their relation to Indians. His results are different from the linguistic school, the "Aryan Migration" school, whose proponents see in the Rig Veda, a small set of migrations/ linguistic migration from west to east towards India. There is as yet no consensus as two which of the models are correct.

Shrikant Talageri, on the other hand, using the Anukramanis or the indices, constructs a framework that involves a re-appraisal of the internal chronology of the Rig Veda. He refutes the existing mandala chronology of (2...7), (1,8,9,10) and instead proposes a different chronology and demonstrates from within the Rig Vedic text itself that the "Aryans" were none other than the Bharata clan and were infact one among many clans of north and central India. Over time, different clans like the Anus, Druhyus migrated west-wards, however the Bharatas were always a part of the Indian sub-continent, initially restricted to central India but later al over north-western, northern and north-central India.

Seen from this perspective, it is in sync with the geographic expansions as highlighted in the Puranas. Shrikant Talageri belongs to the "Indigenous Aryan" school of thought who insist that "Vedic Aryans" were neither migrants nor invaders, but were infact original indigenous inhabitants of India. The other school of thought, is that of "Aryan Migration" based primarily on linguistic grounds.

This is a very well-researched book and presents a very convincing theory of the history of the Indian people, although there is still ample scope for refinement and evolution of the theory. The analysis presented in the book is rigorous, scientific, systematic, methodical and is indicative of a patient scholarship on his part, and the onus rests with the proponent of  the "Aryan Migration" theory to disprove the core thesis of Shrikant Talager's work. On the negative side, I think that the personal attacks on other academicians was unwarranted, although by no means unjustified – the criticism could and should have been presented in a much more refined way.

All in all, I would call this an excellent analysis of the Rig Vedic people from the Rig Veda itself without recourse to external linguistic theories.
history