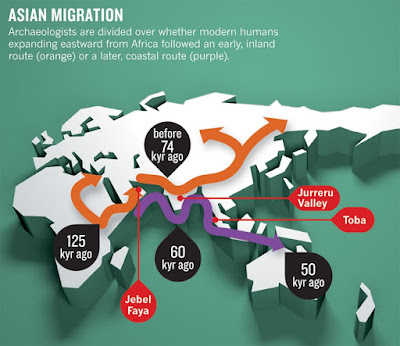 Till now the most commonly accepted theory of the advent of modern humans was the "Out of Africa" theory according to which anatomically modern humans migrated ~60,000 years ago from East Africa to gradually colonize the whole world. In the words of an archaeologist "modern humans left Africa long after the Toba eruption, 60,000 years ago at the earliest. Equipped with new technologies, including bows and arrows, they beach-hopped along the coastline of the Arabian peninsula, India and southeast Asia, reaching Australia in short order."

However some archaeologists based on recent findings "from the Jurreru Valley and other sites in India and Sri Lanka" among others, believe that "people spread into Asia at least 74,000 years ago, and perhaps as early as 125,000 years ago, well before Toba, during a wet, warm interlude between ice ages, carrying tools no more sophisticated than those made by earlier humans."

The map above (from Nature) indicates the routes assumed by the two competing hypotheses.