In this article I will talk about Muhammad Bakhtiyar Khilji and his conquest of Bengal and Bihar. The fact that Bangladesh is an Islamic nation today is because of the victory of Bakhtiyar Khilji. So if you want to know the history of Bhaktiyar Khilji, read on. 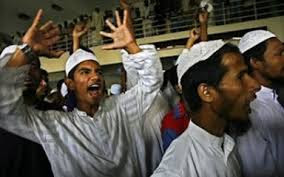 He is held in high esteem in Islamic Bangladesh, because during Bakhtiyar Khilji's reign, Islam achieved most number of converts in India (2). Al Mahmud, a famous Bangladeshi poet, wrote a book of poetry on Bakhtiyar Khilji, titled Bakhtiyarer Ghora (Horses of Bakhtiyar) in the early 1990s where Bakhtiyar Khilji was portrayed as the praiseworthy figurehead of conquest of Bengal.

However in democratic secular India he is considered a terrorist, a jihadi fundamentalist and a war criminal, similar to Osama Bin Laden or homosexual genocidal maniac Mahmud of Ghazni. Muhammad Bakhtiyar Khilji has been described by a historian as below:
"Muhammad ibn Bakhtiyar Khilji is a cursed name in the history of human progress because he had a penchant for seeking out and destroying world-famous Hindu seats of learning .. Muhammad Bakhtiyar Khilji belongs to that serried and solid phalanx of Muslim invaders who like countless, despicable termites made short work of books, scriptures and Hindu seats of learning."

In Bihar India, there is a place called Baktiyarpur, named after Muhammad Khilji.  In 1193 when Ikhtiyar ad-Din Muhammad bin Bakhtiyar Khilji conquering Bihar, he came to destroy Nalanda University. On the wau he destroyed Buddhist monastries of Bakhtiyarpur, and muslim soldiers he left there named place Bakhtiarpur.

Muhammad Bakhtiyar Khilji was one of the crowd of Khilji adventurers ( Khiljis ) who separated themselves from their tribe settled in Garamair .. He had no pretensions to a high lineage or rich heritage in his native land. 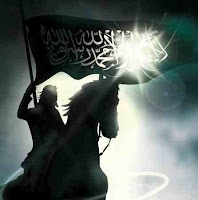 About eleven miles due east of Chunar and some thirty miles from Mirzipur the village of Bhuili, overhung by a fort in ruins at the northem foot of the Vindhya range, now marks the cradle of Muhammad Bakhtyar's power and ambition .. After having supplanted the petty Gahadvar chiefs of this tract, he began ravaging the open country to the east of the Karmanasa and in the direction of Muner and Bihar. His fame as a doughty Lord Marcher and successful general soon attracted to his standard large bodies of Khiljis and Turks wandering about in Hindustan in search of bread and a new home. As the eastward expansion of the Muslim power through North Bihar was at this time barred by the powerful Hindu kingdom of Mithila under the Karnataka dynasty the momentum of the Muslim offensive under the leadership of Muhammad Bakhtyar acquired a greater driving force in South Bihar.

Muhammad Bakhtiyar Khilji was not the knight-errant of Islam to seek out and fight only his most formidable Hindu adversaries of whom there were several in the neighborhood.
- Harishchandra, son of Jayachandra of Kauauj maintained his independence till at least 1100 A.D.;
- a feudatory of that house, Ranaka Vijayakarna, erected a votive stone-pillar at Belkhara within 8 kos of Chunar in 1197 A.D.
- the Mahanayakas of the famous fort of Rohtas maintained their independence and one of their sub-vassals, Mahamandalika Udayaraja of Navanerapattana granted some villages to a Brahmin family in 1197 in the neighbourhood of Dehri-on-Son. 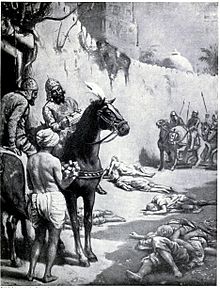 Muhammad Bakhtiyar Khilji had no siege-train for capturing strong Hindu forts; nor was it his policy to provoke any wide-spread commotion in the country. His object was to secure a maximum of booty at a minimum of risk and bloodshed. So he confined himself to scouring the open country undefended by the field army of any organised State.

Nalanda University was the first Hindu-Buddhist fully residential university, and had inearly 10,000 students and about 2000 faculty members teaching a wide variety of topics like metaphysics, philosophy, Hindu Samkhya, Yogas, Vedas, Pali , Madhyamika and Tantrik darshana. Both Nastika (Jain, Buddha) as well as Astika (Samkhya, Nyaya, Vaisheshika, Yoga, Mimasa) studies were pursued by the students with great gusto. For 800 years, Nalanda University thrived under Hindu and Buddhist rule. Nalanda University was held in high esteem by both Buddhist (Palas) as well as Hindu rulers (Guptas, Senas).

After having plundered the Hindu territory "for a year or two," he made a sudden dash for " the fortress of Bihar" (hisar-i-bihar) , captured it by forcing its postern-gate and put to the sword all its inhabitants, most of whom were shaven-headed monks possessing much wealth and more books. As the Muslims learnt afterwards that it was a vihAra or madrAsa, they gave the "whole country the name of Bihar, which had once been no doubt a land of Buddhist monasteries also. The fortified monastery which Bakhtyar captured probably in 1199 A.D. was known as Audand-Bihar or odaNDapura-vihAra. 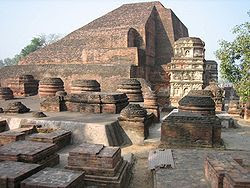 Qutub-ud-din Aibak to Bakhtiar Khilji: Khilji, I want you to march towards the Bay of Bengal and bring this entire Kafir (infidel) land under my rule. It is time for us to spread the teachings of the Holy Prophet, declared the Sultan.

As Kalji stopped his troops a couple of miles from the Nalanda complex, he was awed by its size and grandeur. What is this magnificent complex? He wondered. He ordered his soldier Abdulla to investigate.

Abdulla went towards the complex gate where the guard stopped him. The guard informed him that, as the tradition went, he had to answer three questions before he entered the complex.

Unable to answer, Abdulla got irritated and went back to his master the general himself galloped towards the gate and ordered his men to follow him. The guard stopped Muhammad Khilji and asked him the same questions he had asked Abdulla. He calmly drew his sword and beheaded the guard. 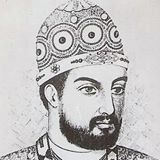 After the prayers were over, Bakhtiar Khilji and his troops were truly energized. The general ordered the troops to swarm the university and spare no infidels.

Thousands of monks and students were beheaded and blood flowed in streams.

Temples, Stupas, and statues were destroyed. Those who could run tried to save their lives by hiding in the library as no one inside the university was taught to be a fighter. Moreover, they had no arms and were defenseless.

The general and his men came in front of the library. An old monk came from inside and begged the general to spare at least the library.

"Books will do no harm, please do not destroy the library," begged the old monk. 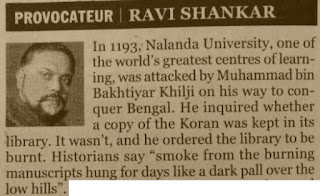 "Is there a copy of the Holy Quran inside?" asked the general.

"No, there is not," replied the monk.

The answer infuriated the general beyond limits. The monks had to be punished , "And if any believe not in Allah and His Messenger, We have prepared, for those who reject Allah, a Blazing Fire!"

"Then, it is settled. Burn the library," he ordered his troops as he swung his sword again, beheading the old monk.

As the library was engulfed in flames trapping those who had taken refuge in the building Bakhtiar Khilji, who was utterly disgusted at the practice of idolatry he had just witnessed, addressed his soldier Abdulla.

"Brother Abdulla, It is going to take a long time to eradicate idolatry from Hindustan. Insha'Allah, we will succeed one day, and we will clean this place forever. We shall make this Kafir land truly Dar Al-Islam." 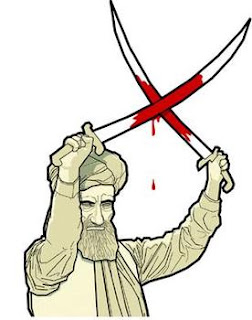 The burning of the library continued for several months and "smoke from the burning manuscripts hung for days like a dark pall over the low hills." (5)

According to all Muslim historians, Muhammad Bakhtiyar Khilji led his army a second time in the direction of Bihar in the year following the sack of the fortified monastery of that name. This year, i.e. 1200 A.D., he was busy consolidating his hold over that province .. There is a very faithful echo of the then state of things in Bihar in the Buddhist tradition which tells us that the famous saint and scholar, Shakya Shribhadra of Kashmir visited Magdha after 1200 A.D. The traveler found Odantapuri-vihira and the Vikramashila monastery in ruins, and terrified by the excesses of the Turks in Magadha he fled for safety ..

"The Holy War" in Nadia undertaken by Muhammad Bakhtyar Khilji

During the dry season of the year 1201 A.D. a troop of foreign cavalry was riding with loose reins towards the city of Nadia. When the sun was at the meridian these men only nineteen in number, slackened the momentum of their ride before the city-gate, and assumed the placid demeanour of merchants. The strangers slowly proceeded unchallenged through the city to the palace of King Lakshmsena where all of a sudden they drew their swords, and as the Muslim historian puts it "began the holy war". [ When he reached the gate of the residence of Rai Lakhmaniya, he drew his sword and began the slaughter of infidels... Muhammad Baktiyar had run into his palace and harem and cut down a number of people. (Tabaqat-i-Nasiri, Bib Ind., 150-151)]

All was now tumult and panic within the palace as well as in the city outside. When the old monarch. just seated at his meal learnt that the assailants had already dashed into his palace and the inner apartments, he hurriedly took to flight and got into a boat which sailed down the river for some refuge in East Bengal. The victory of Bakhtyar was completed "when his whole army arrived and the entire city was brought under control."

Conclusion
Thus Islam finally arrived in eastern India with the advent of Bahtiyar Khilji. After 800 years this lead to the division of Bengal into secular democratic West Bengal and Isalmic Bangladesh. 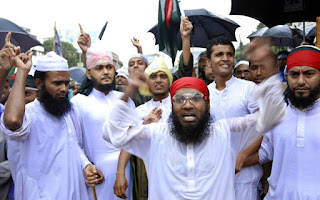 Other Sources
(1) https://en.wikipedia.org/wiki/Muhammad_bin_Bakhtiyar_Khilji
(2) The preaching of Islam: a history of the propagation of the Muslim faith By Sir Thomas Walker Arnold, pg. 227-228
(3) As per P.N. Oak http://www.hindubooks.org/dynamic/modules.php?name=Content&pa=showpage&pid=1881&page=4
(4) Nalanda - A Forgotten Genocide http://alt.religion.hindu.narkive.com/6EyTB2DH/nalanda-a-forgotten-genocide
(5) Gertrude Emerson Sen (1964). The Story of Early Indian Civilization. Orient Longmans.

That's it. Thank you for reading Bakhtiyar Khilji's conquest of Bengal and Bihar. Please show your appreciation by sharing and/or leaving a comment.