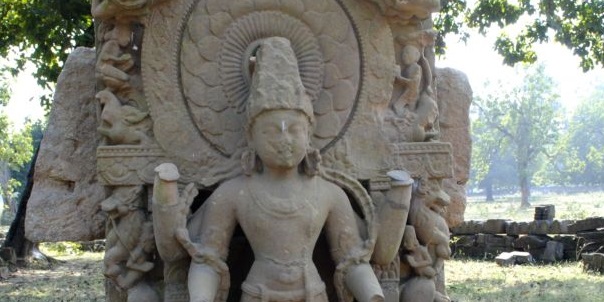 Early Vaishnava Iconogrpahy in Bengal - "The time when images first formed objects of worship in Bengal cannot be determined with certainty. It is in a way bound up with the larger problem of the antiquity of image-worship in India on which widely divergent views have been entertained by scholars. It does not seem likely that image-worship occupied an acknowledged and important place in the. religious life of Bengal, till the introduction of various sectarian religions in which bhakti, or loving adoration of the one personal god by his devotees, formed the fundamental element."

"There can be hardly any doubt that images were at first made mostly of perishable materials like wood or clay. These factors, together with deliberate acts of vandalism,specially by foreign invaders, explain, to a large extent, the paucity of early examples of images in Bengal."

"The Viṣṇuite groups of images are the commonest among those discovered in Bengal proper. The commonest form of Viṣṇu images in Bengal belongs to the variety known as Trivikrama."

"The four-handed images of Viṣṇu,which are commonly met with, generally depict either one or other of the vyUhas, of which, according to the fully developed pa~ncharAtra theology, there are twenty-four, or some of the vibhavas (incarnatory forms), especially several of the celestial ones. The human incarnations of Viṣṇu are usually endowed with two hands, while his vishvarUpa variety is multi-handed. The twenty-four forms of four-handed Viṣṇu images are differentiated by the varying order in which the four hands hold the usual attributes, sha~Nkha (conch-shell), chakra (wheel), gada (mace), and padma (lotus). Sometimes the last two are personified as Chakra-purusha and Gadadevi."

"The Brahmanical images and terracotas unearthed in course of excavations at Paharpur are assignable to the Gupta (320 to 550 CE) and post-Gupta periods (550 C.E to 750 C.E). Stories and exploits connected with the life of kRRiShNa are illustrated profusely in panels and they go to show that the kRRiShNa cult was popular in Northern Bengal even in the Gupta period."

"The earliest Viṣṇu image  is the relief-like free-standing sculpture of vish~u from hAnkrAil (Maldah). It is a four-armed figure, its upper right and lower left hands as well as the legs being partially broken. Its lower right and upper left hands hold a lotus-bud and a conchshell respectively, and its sparse ornaments consist of a low kirITA,kuNDalas, hAra, a~Ngada and yaGYopavIta."

A bronze image of viShNu from Rangpur may be assigned to the Gupta period.

An ordinary Viṣṇu and Viṣṇu sheSha-shAyin in the Tepa collection at Rangpur
- viShNu from Laksmankathi Backerganj
- Jogirsoan, Rajshahi
- A baked clay seal of the god from Sabhar, Dhaka

"An elegantly carved huge image of Viṣṇu, in greyish black stone, about 6' 4" in height, found near Lakshmankati (Bakarganj) where Viṣṇu is seated in laiitaAsana on the out-stretched wings of a three eyed garuDa who is shown as about to soar upwards. The back right and back left hands hold two lotus flowers by their stalks, on the pericarps of which are depicted, respectively, miniature seated figures of Kamala (Gaja-Lakshmi) and Sarasvati, the latter playing on an antique-shaped harp. The right and left front hands of the deity hold chakra (with Chakra-purusha inside it) and the miniature figure of Gada-devi. On a high hexagonal kirITa mukuTa is shown a four-handed deity seated with its hands in the dhyAna mudrA and the back hands carrying some indistinct objects, possibly two of the attributes of Viṣṇu (if this surmise is correct then this could stand for Yogasana viShNu). On the top and bottom sections of the stella appear the flying vidyAdharas and the donor couple respectilvely, and the central figure is tastefully decorated with vanamAlA and other usual ornaments. The image can, with some amount of confidence, be referred to the early Pala period."