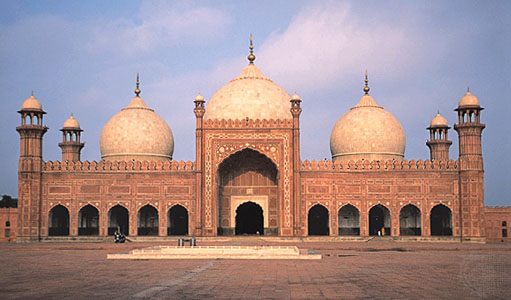 Mahmud Ghazni (971 – 1030) was a tyrant and despotic Islamic Warlord. He conquered and destroyed thousands of Hindu temples during his raids including the famous Somnath Temple which he destroyed in 1025 AD, killing over 50,000 people who tried to defend it. In today's age he would have been labeled a war criminal for his crimes against humanity.

Below are some extracts from the English translation of the gushing and eloquent accounts of the exploits of Mahmud in Tabakat-I-Nasiri (Tabaquat-i-Nasiri) by Minhaj-i-Siraj a 13th century Indo-Persian Muslim historian.

English translation: Tabakat-i-Nasiri : A General History of the Muhammadan Dyansties of Asia, Inclusding Hindustan; from A.H. 194 (810 A.D) to A.H. (1260 A.D.) and the Irruption of the Infidel Mughals into Islam by Maulana, Minhaj-ud-din, Abu-umari-usman
Translated from Original Persian Manuscripts by Major H.G. Raverty Vol 1 (1881, Bibliotheca Indica, Asiatic Society of Bengal) (Page 75 onwards)
----------------------------------------------------------------
Background
"When Sultan Mahmud ascended the' throne of sovereignty, his illustrious deeds became manifest unto all mankind within the pale of Islam, when he converted so many thousands of idol-temples into masjids, and captured so many of the cities of Hindustan, and overthrew and subdued its Raes. Jaipal, who was the greatest of the Raes of Hind, he made captive, and kept him [a prisoner] at ManYazid,in Khurasan, and commanded that he might be ransomed for the sum of eighty dirams. He led an army to Nahrwalah of Gujarat, and brought away Manat, the idol, from Somnath, and had it broken into four parts, one of which was cast before the entrance of the great masjid at Ghaznin, the second before the gateway of the Sultan's palace', and the third and fourth were sent to Makkah and Madinah respectively."

The translator adds: " Some fragments or idols might still have been seen lying near the entrance to the Sultan's tomb a few years ago, and probably they are still there."

He continues:
"Concerning this victorious expedition the poet 'Unsuri composed a Kasidah, or poem, two couplets of which are here inserted :-
When the potent sovereign made the expedition to Somnath,
He made the working of miracles his occupation.
He staked the Chess of dominion with a thousand kings :
Each king he check-mated, in a separate game."

Attempted Hindu Retaliation and Consequence
"When he retired from Somnath, and desired to lead back the army of Islam by way of the desert , to Sindh and Mansurah, out of Gujarat, he directed that guides should be procured. A Hindu presented himself, and offered to act as guide, and that sovereign, with the army of Islam, proceeded on his way. After the army had marched all night and next day, and the time had come round for the troops to halt, although search was made for water, none was any where to be found. The Sultan directed that the Hindu guide should be brought before him, and inquiries made from him.
This was done, when the Hindu guide replied to the Sultan, saying: "I have devoted my life for the idol Somnath, and I have led you and your army into this desert, in any part of which water is not to be found, in order that you may all perish."

The Sultan commanded that the Hindu should be dispatched to hell, and that the troops should halt and take up their quarters for the night.

Mahmud Ghazni and his slaves
"... his court was guarded by four thousand Turkish slave-youths·, who. on days of public
audience, were stationed on the right and left of the throne, -two thousand of them with caps' ornamented with four feathers. bearing golden maces, on the right hand, and the other two thousand, with caps adorned with two feathers, bearing silver maces, on the left .. "

The author clarifies:
"The words used are (middle-east script) Washak signifies a good·looking slave, and a beardless youth ; and has sometimes been used to signify a slave girl. As these youths attained unto man's estate and their beards began to grow, they were attached to a separate corps, and placed occasionAlly under the command of rulers of provinces."

Mahmud's expedition to Mathura and his usual looting, rampage and pillage, destruction of Hindu temples and idols:
In the year 409 H. [see Elliot. vol ii.p. ,.60). .Sultan Mahmud undertook another expedition against the Infidels of Hind, and overcame Hardab in that region, at which place (Mathura) there were nearly, a thousand palaces of stone and an idol-temple of such extent and size, that " if a thousand times a thousand thousand dinars should be expended, and builders and workmen of the greatest activity and energy should be employed Cor two hundred years, they could not complete the like." Within this great temple were five idols of gold, five gas or ells in height, and the eyes of one of them were formed of two rublis [Jami'-ut-Tawirikh - "of a dark red colour "], which were valued at 50,000 dinars of gold. The eyes of another were formed of two sapphires, of the weight of four hundred mishkals ! [600 mishkals = 1 ser = 1 lb 13 oz.] the immense value of which could not be computed. From the lower extremities of one of the idols, pure gold of the weight of 4400 mishkals was obtained. Besides these great idols, there were two hundred others of silver, in the temple, the whole of which were broken up and the temple itself was overthrown, and set on fire."

Mahmud's other expeditions and his usual looting, rampage and pillage, destruction of Hindu temples and idols:
"After this Kinnauj (Kanauj) on the Ganga, and other places, were captured, the details of which events are too long for insertion here but among them is mentioned Nardin, the fortress of "Bramah" [perhaps the place called Bhiwan or Bahawan by some authors] called Manj, Asi, and other places. From the idol-temple of the first named, a stone tablet was brought, on which was written that the temple had been founded forty thousand years before. Jai-pal of Kannauj fled across the Ganga, on the bank of which were ten thousand idol-temples in seven fortresses. At the capture of Asi, Chand·pal Bhud, the sovereign of that part, was slain."

"In 417 H. the expedition against Somnath was undertaken, and a farther portion of Hind was subdued some by treaty and agreement to pay the jaziah or capitation tax, some by force of arms and plunder of the country, and making captives of the people, and some by the people becoming converts to Islam."
history shocking