.. and so is monotheism.


Communism, because it is simply an assault on individuality, freedom and intelligence - and because it expects complete submission to an ideology - any opposition is severely and violently dealt with. A closer inspection of the communist history of Russia, Cuba, China,  North Korea etc will demonstrate the utterly violent and barbaric nature and manifestation of communism.

Monotheism is pretty much the same - it expects one to believe in the existence of a "God" (with a capital G); a God who views everything from up above the world so high - a benevolent yet violent God, a just yet jealous God - and of course a male God. He is supposed to have written "truths" and "stories of origin" in his Books - and anybody who does not abide by His "rules" must be either forcibly and violently converted or persecuted and killed. Early history of Christianity, Islam, the Vedic Indra cult in terms of their bloody conquests and spread, pretty much illustrate the unbelievable violence inherent in the spread of monotheistic creeds. 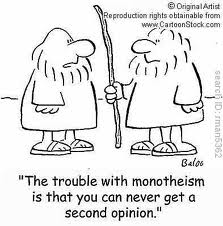 In fact, I always insist that communism (and more generally socialism) and monotheism are two of the greatest frauds perpetuated by man in the last few thousand years. The other big fraud is of course the very notion of a "nation" - the mythical concept of statehood (in the vein of an anarcho-capitalist of the tradition to of Austrian economics - perhaps more towards the right).

As far as I am concerned, there is no God (God with a capital G) - there is no Ultimate Reality or Ultimate Principle. No one sits in the skies above - there is no divine benevolence, there are no miracles, their is no "dua" or "ashirvaad" - these are tools used by con-men to fool and con people - the priests, the kings, the Brahmins, the maulavis, the Sufis, the pontiffs - even to this day and age they use this tool effectively and keep billions of people under subjugation.

There may however be many gods (with a lower case g) - in fact there should be many gods, given that each individual in this planet is uniquely different from each other. Each person should be entitled to have and follow his own personal god in whichever format he desires in order that he may pursue his spiritual quest and evolve as a human being. But does organized religion allow this individual freedom? No - it will super-impose Jesus, Allah or Vishnu on a person's ideology; it will poison the person's thought process by establishing a "framework" and boundaries - the individual now has to retro-fit his ideas to suit the "rules" and "ideas" of this religion - rules prepared by some person/ group of persons who may have been less evolved, less intelligent and possibly even a madman/ madwoman.

The only Truth (if I may be so bold to theorize) is one's self - here and right now. One should be strong and resolute from the inside, one should try to lift the veil of ignorance by constant study, learning and knowledge, one must keep on asking questions till he or she gets answers, one must keep on fighting superstitions and dogmas. Only then shall one be free - because freedom comes from inside. And with freedom, one may perhaps find "divinity" within oneself.

I am not an atheist - or maybe I am in a way - because atheism (being a Western Christian concept) views religion through a "monotheistic" lens and denies the existence of One Supreme God. To that extent I am atheist. But I am also a Nastik in the Hindu tradition - I do not believe in the "divine origin" of the Vedas or divinity of gods or in one ultimate divine reality - nor do I subscribe to the actual Nastik religions like Buddhism or Jainism. I am a kafir or non-believer in the Muslim tradition - I do not subscribe to Islam's definition of a God who is unforgiving towards non-believers.

At the end of the day, I am the representative of a long continuous tradition of the search for Knowledge. And I take this role of a Brahmin very seriously. Religions have come and gone, "Gods" have come and gone and obstructors of knowledge have come and gone - but the quest for pure unadulterated knowledge has continued through the ages. [However beware of fake Brahmins - those who follow inane rituals and think that their degree of Brahminhood is directly proportional to the amount of vegetarian food they eat]. Therefore as a man of reason, I absolutely reject the notions of communism, monotheism/ organized religion and statehood - these constructs shackle our minds and prevent us from realizing our true potential. Perhaps no one has summed up monotheism  so succinctly as Gore Vidal in his 1992 speech. 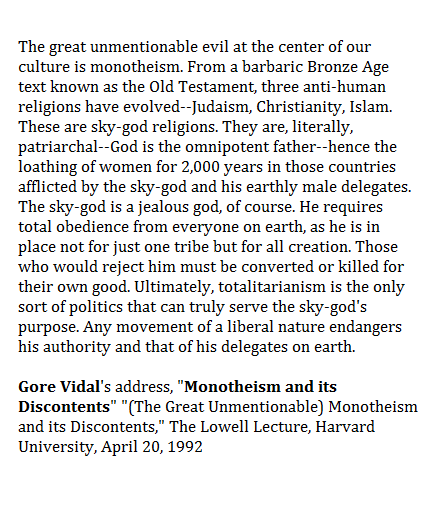