Arab Spring is a conspiracy and nothing else

July 16, 2013
Nobody believed me when I said that the so-called "Arab Spring" was not a "revolution" of any kind but a massive fraud perhaps equal in magnitude to communism (or monotheism and its jealous "God").

Arab Spring wasn't a victory of moderates over hardliners, it wasn't a cry of youth for better societies - it was simply a ploy by religious fundamentalists to seize power, impose strict Sharia and incidentally legitimize terrorism. Doesn't the very name "Muslim Brotherhood" emanate danger signals? Am I the only one who hears the alarm bells? 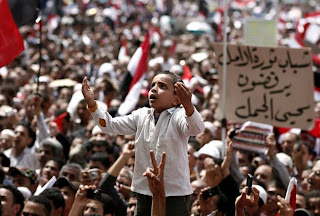 But then again who listens to me?

Recently, Economist came up with a piece which talks about the failure of the "Arab Spring" and its ramifications. As these "Arab springers" tighten the sharia noose, people world over are slowly realizing that they have been massively hood-winked and scammed.

What else is new?