On why I support Shri Narendra Modi 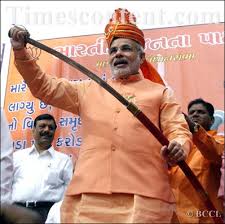 As a follower of the Austrian tradition of economics with anarcho-capitalistic inclinations, I don't really care much about the role of the government and state, but would rather rely on individual and free enterprise. Therefore I do not focus on Shri Narendra Modi's achievements in terms of development, good roads, model cities, poverty alleviation etc.

I would have supported him even without those, because:

a. He is a Hindu leader who respects Hinduism and its various traditions. He never forgets the fact that India is a country with almost 85% Hindu population who do not like their culture being insulted by politicians, journalists, communists, fake historians, people of other religion with lesser culture and secularists

b. He is a Nationalist who puts national interest before political correctness

c. He calls a spade a spade, a rare quality in a politician - his characterization of Congress as always hiding behind a "burkha of secularism" is a very apt

d. He is a businessman, and unlike politicians he understands difference between red-tape and rules - our country needs more businessmen and not politicians

e. He understands who the enemy is, and is not afraid to act decisively to thwart their evil designs

That is why I support Shri Narendra Modi.
current-affairs