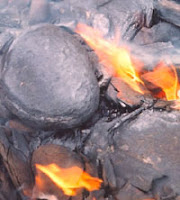 What does shale deposits have to do with world peace?

A lot. Oil shale is a viable alternative to fossil fuel. In fact, it has been the shameful dependence of Western civilization on conventional fossil fuel that is responsible for world wide terrorism.

Over the last 70-80 years trillions have dollars have been pumped into the middle-east to extract fossil fuels like petrol. Given the terrain of the geography, a substantial amount of this money has naturally gone into funding religious institutes all over the middle east and into funding extremist groups who in a frenzy of Holy war and garb of piety will not hesitate to blow up innocent people  in their journey towards "Heaven".

It took the western world more than 75 years and incidents like 9/11 and London attack to realize the grave mistake they had been making for decades.

However with the recent discovery of shale deposits in abundance in US and Canada, they can at last, if sense prevails, reduce their dependence on petrol from middle east, which in turn will reduce dollar inflows and resulting fundamentalism. And what is the middle east without petro dollars? A desert.