The Sanskrit dialect which is studied today in India is based on the grammar treatise of Panini, which was later enlarged by Katyayana and commented upon by Patanjali.

Sanskrit Grammar is ancient,more than 2000 years old and has helped to give shape to the grammars of most latter Indian languages. Sanskrit is a very precise language and Sanskrit encapsulates many principles of discrete mathematics such as the Backus Normal Form.

Below I have down a review and analysis of some very good books to learn Sanskrit from different perspectives..

As per the author Shripad Damodar Satavlekar himself,  anyone who reads Sanskrit Swyam Shikshak book regularly 1 hour per day will learn conversational Sanskrit in 1 year's time.

Short Review of Learn Sanskrit in 30 Days
Learn Sanskrit in 30 Days is available in almost any store in India except probably in Kashmir, Arunachal Pradesh, Kerala, Manipur and Nagaland. The books is part of the popular “National Integration” series of language learning books in India published by Balaji Publications, Chennai, The book was compiled by Vidyavisarada K. Srinivasachari, who wass a Professor of Language at the Samskrita Bhasha Pracharini Sabha, Chitoor.


4. Best Book to Learn Sanskrit at an Intermediate to Advanced Level based on Panini Style - A Higher Sanskrit Grammar

A Higher Sanskrit Grammar is a very detail-oriented Sanskrit study book. Most of the rules given in the book are translations of Panini's sutras. Some of the special features of the book are:


Devavanipravesika: An Introduction to the Sanskrit Language by Robert P. Goldman


The purpose of the book Devavani praveshika is to "provide a self-contained primer, workbook and reader for teaching first year Sanskrit students with no previous linguistic training. The author has tried throughout the work to introduce, explain and illustrate the most significant features of the language and through verses, quotations, and readings."

Measurable outcome of the book: "Upon completion of this course, students should have a real working knowledge of the major outlines of Sanskrit sentences with some facility and read, with the help of dictionary, approximately five to ten verses of the Valmiki Ramayana or a similar text in an hour."
The biggest advantage of the book also becomes its biggest disadvantage. The author Robert P. Goldman tries to introduce too many things at once in a chapter. At times the writing is very tedious and monotonous.

This book is very popular among non-Indians, especially at a Graduate level, who want to learn Sanskrit from the grounds-up, in the Western style.


7. Best Book to Learn Sanskrit at an Intermediate Level - Second Book of Sanskrit

Short Review of Second Book of Sanskrit
Apart from this there are some other books which people recommend. I have not read them, but I am mentioning them for the sake of completeness. 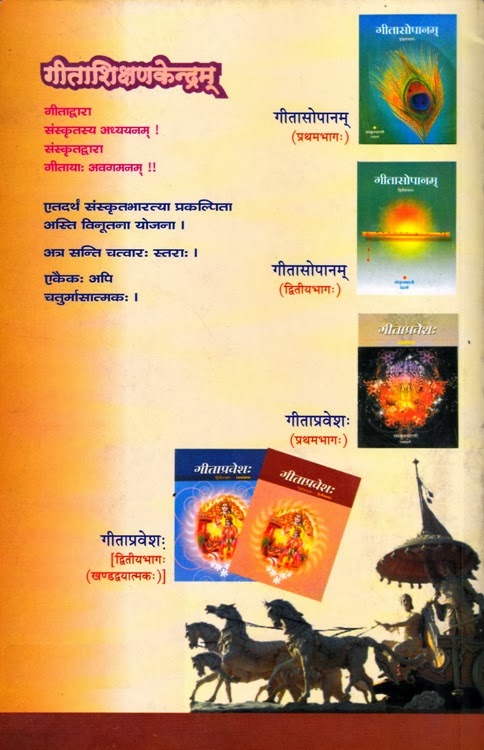 The syllabus includes some inspirational incidents, some day to day life event like planning an event, some funny story like a story about Albert Einstein, some humor, some puzzles and some wisdom. Source.

Further Reads
Good books to learn Sanskrit Samskritam
What is the best way to learn sanskrit? Any sources?

That's it. Thank you for reading "Best Book to Learn Sanskrit". Please show your appreciation by sharing and/or leaving a comment.