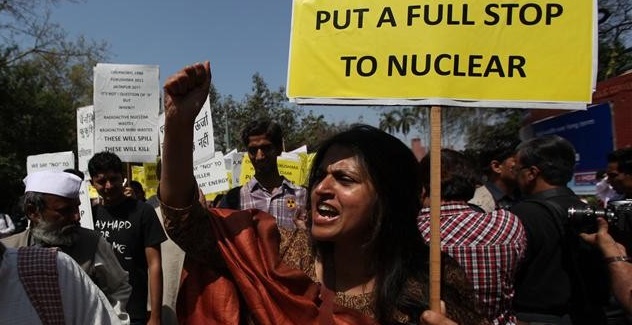 In this post I will talk about the topic "India kicks out Greenpeace" and why its good for India.

As per Varadarajan Ravindran: "Greenpeace India opposes any type of progress for the nation. The country needs a lot of energy related projects. It is time that Greenpeace stop interfering with governmental policies. Greenpeace cannot do anything in United States, Canada or Australia."

Greenpeace is a Terrorist Group
Greenpeace is actively aided and led by foreign activists visiting India, grossly violating the provisions of the Foreign Contribution (Regulation) Act of 2010 (FCRA), and financing sympathetic studies at the Tata Institute of Social Sciences (TISS) and at IIT-Delhi.

Shockingly, Greenpeace has declared war on India’s economy, trying to shut down industrial developments. Opposing coal mines; opposing nuclear power too. So, pretty much opposing any electricity for India.

Pdonger says: "Greenpeace is a load of shit now ..."

Zoro_3: "I lost respect for them when they tried to shut down a fucking nuclear reactor claiming pollution."

Greenpeace and Ultra-Left
"Ultra-left organizations like Greenpeace almost never bring about positive change. They are just out to push their political agenda. There is nothing peaceful about the Eco-terrorist organization know as Greenpeace.﻿ Greenpeace is also always trying to brainwash our youth into working for them. Greenpeace only cares about Greenpeace."﻿

It is not the first time: the group’s registration was also revoked in Canada and New Zealand for similar reasons. The Canada Revenue Agency found that Greenpeace had no public benefit and its lobbying would send Canadians into poverty.

Manmohan Singh, the ex-Prime Minister of India had complained that foreign-funded NGOs were blocking the expansion of nuclear power and the introduction of genetically modified products. An intelligence report prepared for the incoming government of Narendra Modi, which took power after a landslide electoral win in May, accused several foreign-funded NGOs of stalling major infrastructure projects at the behest of unidentified foreign powers.

Here is what Cosmic_Bard: "First off, let's start with people thinking this is a bad thing because they're ignorant libtards and don't understand who Greenpeace are, what their history is, what they used to be and who they are now. They're eco-terrorists. You might as well have India order ISIS or the Taliban to shut down and you'd get the same answer. A giant middle finger from said organization and a redoubling of their efforts against them. So many short sighted, ignorant, millennial fucktards on this fucking website, it's infuriating. Nobody does research, everybody just does snap reactions about shit acting all justified and vilified and it fucking makes me sick." 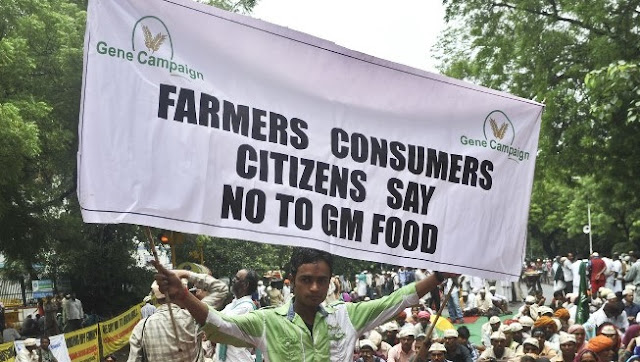 Greenpeace and Aam Aadmi Party (AAP) Nexus
Former Greenpeace consultant Pankaj Singh stood as an Aam Aadmi Party candidate from Sidhi Lok Sabha seat in Madhya Pradesh in the recent general elections. Mahan coal mines, against which Greenpeace has been protesting, fall under this constituency. The IB report says that Singh’s organisation Mahan Sangharsh Samiti, which is leading the agitation in Singrauli district against both public and private sector coal mines, received regular funding from Greenpeace. Singh is the Samiti’s co-founder.

As per Jnana Samaaj: "Only morons of the first order would want agenda-driven, foreign funded NGOs to exert undue influence in the policy making of a sovereign state. Shameless pAAPis will now wail and weep for an organization whose name they are hearing, probably, for the first time."

Funding Sympathetic Research
To encourage Indian-ness of its anti-coal approach, Greenpeace has financed Tata Institute of Social Sciences to study health, pollution and other aspects at Mahan and plans to use this case to ban all coal blocks.

Since 2010-11, Greenpeace has gradually expanded its activities to oppose coal-fired power plants and associated mining. In March 2013, the IB notes, Greenpeace and the Urban Emissions Conservation Action Trust published a questionable and dubious technical report which claimed 1,00,000 deaths in FY 12 due to health problems arising from 111 existing coal-fired power plants in India.

God_Here-supp says: "They've never been innocent. These guys are ISIS for the environmental caliphate. They're terrorists and swindlers. "

January 2015
A Greenpeace campaigner was stopped by Indian officials from travelling to the UK to deliver a talk to MPs about the impact of mining on a poor communities and the environment in central India. 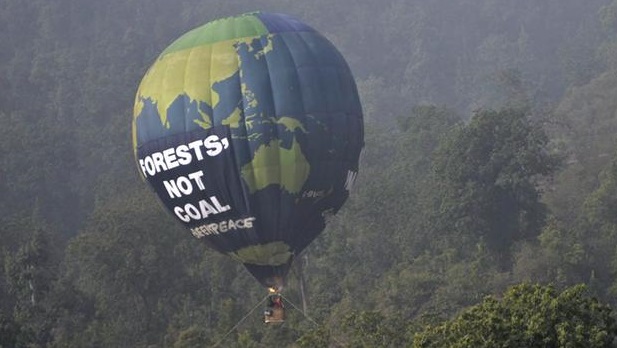 April 2015 - Government of India  suspended Greenpeace India’s licence to receive foreign donations
Following allegations of violating Foreign Contribution (Regulation) Act, 2010 and "prejudicially" affecting the public as well as economic interests of the country in "violation of Section 12(4)(f)(iii) and Section 12(4)(f)(ii) of the FCRA 2010", the MHA suspended Greenpeace India’s licence and bank accounts for six months on April 9. In a fresh notice, the MHA has asked it as to why its registration should not be cancelled permanently. The government had suspended Greenpeace India’s licence to receive foreign donations because:
The Indian government has frozen bank accounts of Greenpeace after accusing the international environment campaign group of encouraging anti-development protests in India. There is clear evidence to prove that Greenpeace had been misreporting their funds and using their unaccounted foreign aid to stall crucial development projects.

Reasons listed out by MHA for freezing accounts of Greenpeace India.
June 2015
In June, the government barred Greenpeace from receiving funds from Greenpeace International and Climate Works Foundation – some 30% of its funding. Over 68 percent of our funds come from more than 77,000 Indians.

The Ministry of Home Affairs (MHA) cancelled the registration of Greenpeace India in Sep 2015. The measure under the Foreign Contribution Regulation Act (FCRA), means that the NGO, part of an international network by the same name, would not be able to receive any kind of foreign donations from now on. Sources said the decision came in the wake of “prejudicially affecting the public interest and economic interest of the state,” which violates the conditions of grant of registration.

Terrorism by Greenpeace on Nazca Lines in Peru
Damage to Nazca Lines - In December 2014, Greenpeace came under criticism following a publicity stunt within the Nazca lines, a UN World Heritage Site inside Peru. Demonstrators entered the restricted area surrounding the Hummingbird lines and laid down banners that spelled out "Time for Change! / The Future is Renewable / Greenpeace". In doing so, they tracked multiple footprints and damaged both the line itself and the area surrounding it. Peru's deputy minister for culture criticized the actions, calling them "thoughtless, insensitive, illegal, irresponsible and absolutely pre-meditated."

Herewegoaga1n: "Their idiocy destroyed parts of the Nazca lines. That sort of special stupidity should not be considered organized. Fuck Green Peace. Something that's survived for centuries and these morons destroy it in less than a day so they could take photos of themselves."

Indianbutnitredone: "Greenpeace are bunch of assholes. They also harmed Nazca lines last year by doing a useless stunt when countries were discussing climate change in Peru." 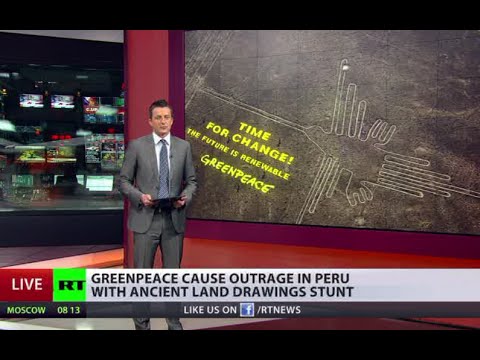 What people say about anti-India Terrorist group Greenpeace
Pankaj Gupta: "We know what USA & British have been up to in countries like Ukraine, Libya, Iraq, Syria, Russia, Egypt, Yemen, Somalia, Taiwan, etc. We need to keep all USA and British NGO's, foundations and human rights organizations on a very very tight leash, and give them a nice kick as soon as they say a single word against India's interests. They can NOT be trusted. Their primary agenda is to further American & British political, economic and military objectives. With the reach of US military worldwide, along with US media, if we allow American NGO's the freedom they desire, sooner or later they will create as much or more havoc in India as they have created in Ukraine, Syria, Libya, etc. with the ultimate aim of achieving White Caucasian Christian & Liberal American domination."

TheCommunal: "Greenpeace has no business to be interfere in political matters. get lost you dirty filth."

Shuun: "Greenpeace is the same as Red Cross and other bastards - its all just for money. And with quite disgusting tactics at that."

Soham_NJ: "Best decision to ban Greenpeace in India.....Eco-terrorists... Per capita emission levels in India are far lower than Europe,US and China....Greenpeace violated Foreign Contributions Act and so was banned. People who are not even Indian..don't even know about Greenpeace activities in India become experts on reddit when it comes to India. Greenpeace opposes and sabotages every development projects in India...People in India are happy that this anti-national ..western backed front to sabotage projects is banned for good."

Here is a video from Canada that summarizes the fraudulent activities of terrorist group Greenpeace.

You may also like:
7 Shocking Facts about Pollution in China
7 Weird Things that Look like an Eye
Different Colors of Potatoes
5 Amazng Words ending with unda
Country that Eats the Most

That's it. Thank you for reading "India kicks out Greenpeace". Please show your appreciation by sharing and/or leaving a comment.
current-affairs shocking