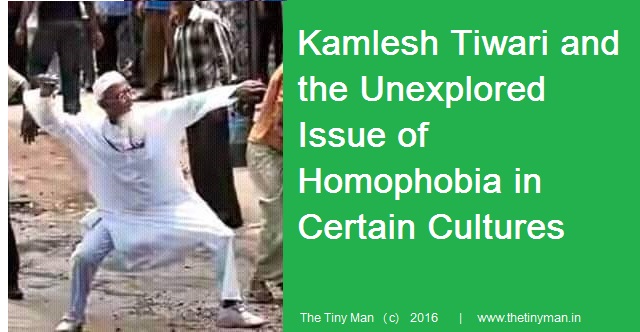 In this post I will talk about Kamlesh Tiwari and Homophobia, and how such incidents are harming India and the idea of free-speech and secularism.

Homophobia is the hatred or fear of homosexuals - that is, lesbians and gay men - sometimes leading to acts of violence and expressions of hostility.

In modern society sexual orientation should not be a deciding factor at all.

In my view, Kamlesh Tiwari is a gay-rights fighter and has exposed the latent homophobia among Islamic community in India. He is like a mirror who has shown the plural Indian society how cruel and ruthless it is to people who are differently-oriented. 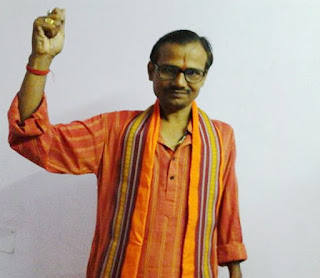 Who is Kamlesh Tiwari?
Kamlesh Tiwari (age 43) claimed to be working president of Hindu Mahasabha. He had called Prophet Muhammad the first homosexual in the world, (1) a day after UP Cabinet minister Azam Khan called RSS members homosexuals. (5)

He is currently lodged at Lucknow District Jail since his arrest on December 2 last year. (7) Tiwari was booked under NSA for his speech in a country which claims to be democratic and celebrates freedom of speech, and Hindu Mahasabha has already disowned him. (3)

What did Kamlesh Tiwar allegedly say?

Tiwari had, according to reports, called the Prophet the first homosexual in a press note. Tiwari’s statement followed a similar statement by Azam Khan where he called RSS members homosexuals. (2) Kamlesh Tiwari questioned the sexual orientations of the Prophet in response to Azam Khan's statement against the RSS, in which he called its cadres homosexuals. (3) On December 3, Kamlesh Tiwari, in a press note issued by him, claimed that Prophet Mohammed was the first homosexual. His statement reportedly came after Samajwadi Party minister Azam Khan had said that RSS leaders are homosexuals and this is why they don’t get married. (4) 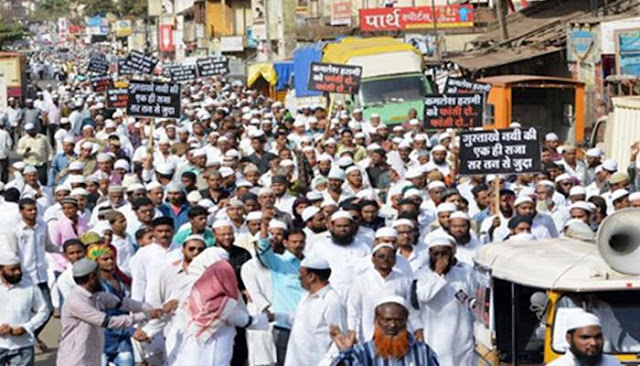 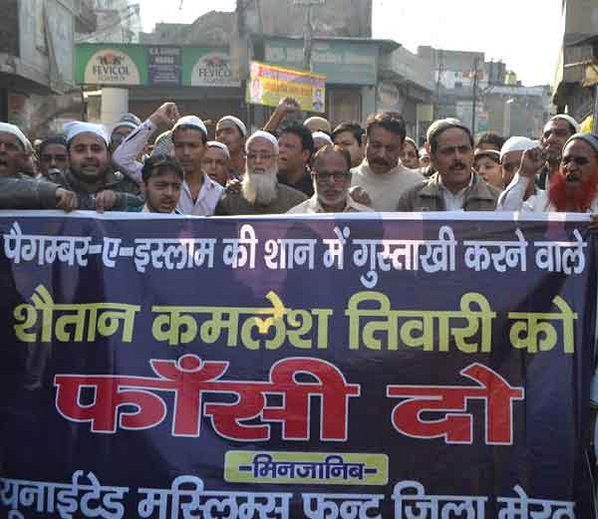 Opinions
What the Scriptures Say
As per Brian Eggleston, there is absolutely nothing to suggest that the Prophet Mohammed (may Allah exalt him and grant him peace) was homosexual. However John Griswald says otherwise. (11)

Bukhari :: Book 4 :: Volume 52 :: Hadith 143
Narrated Anas bin Malik:
The Prophet said to Abu Talha, "Choose one of your boy servants to serve me in my expedition to Khaibar." So, Abu Talha took me letting me ride behind him while I was a boy nearing the age of puberty. I used to serve Allah's Apostle when he stopped to rest. I heard him saying repeatedly, "O Allah! I seek refuge with You from distress and sorrow, from helplessness and laziness, from miserliness and cowardice, from being heavily in debt and from being overcome by men." (10)

As per Shoebat (14), Islam is a homosexual cult, that wants to bring the world into a homosexual pagan empire. The followers of Muhammad consisted of mukhannathun, or cross dressers. It is the same word as mukhannatah, which in Arabic means homosexual. Daayiee Abdullah, an openly gay imam, describes the mukhannathun as "sort of a male-female, cross-dressing types. They existed. And they also lived or worked in the household of the Prophet. Aisha, one of the Prophet’s wives, indicated that there were men who worked in the household. They were mukhannathun. That generally meant that they were not necessarily castrated, but not having an interest in women."

The Qu'ran and Homosexuality as per Fordham University
As per Fordham University (12), Richard Burton suggests the following Qu'ranic verses as relevant to homosexuality:
SURA IV: 19-21
19. But whoso rebels against God and His Apostle, and transgresses His bounds, He will make him enter into fire, and dwell therein for aye; and for him is shameful woe.
20. Against those of your women who commit adultery, call witnesses four in number from among yourselves; and if these bear witness, then keep the women in houses until death release them, or God shall make for them a way.
21. And if two (men) of you commit it, then hurt them both; but if they turn again and amend, leave them alone, verily, God is easily turned, compassionate.
SURA LII:24
"And there shall wait on them [the Muslim men] young boys of their own, as fair as virgin pearls."
SURA LXXVI:19
"They shall be attended by boys graced with eternal youth, who will seem like scattered pearls to the beholders."

Were Moses, Jesus and the Apostle Paul Gay?

Now people have started debating whether Moses, Jesus, Paul etc were also gay. A proverbial can of worms has now been opened because of controversial statement of Azam Khan.

Some believe that Moses the founder of Judaism was homosexual.

Noted human Rights and Democracy activist Peter Tatchell, believes that Jesus was queer (15). According to the US Biblical scholar, Morton Smith, of Columbia University, a fragment of manuscript he found at the Mar Saba monastery near Jerusalem in 1958, showed that the full text of St. Mark chapter 10 (between verses 34 and 35 in the standard version of the Bible) includes the passage: "And the youth, looking upon him (Jesus), loved him and beseeched that he might remain with him. And going out of the tomb, they went into the house of the youth, for he was rich. And after six days, Jesus instructed him and, at evening, the youth came to him wearing a linen cloth over his naked body. And he remained with him that night, for Jesus taught him the mystery of the Kingdom of God".

Many experts believe that Apostle St Paul, the second most imporatnt figure in Christianity after Jesus was gay. Reasons stated are:(13)
- St Paul never married
- St Paul Struggled With an Unnamed Infirmity
- St Paul Struggled With Sin
- St Paul distinguishes between homosexual lust and homosexual acts
- If Paul struggled with his own homosexuality, it may have been the key contributor to his theology of justification through faith.
- Paul had a strained relationship with the other apostles.

Conclusion
Whether Kamlesh Tiwari was correct or not, whether Azam Khan was correct or not is not the bigger issue. What is more important are human values and the issue of homophobia. The Universal Declaration of Human Rights states that "All human beings are born free and equal in dignity and rights". It does not say "some human beings" - everyone, without exception, must enjoy their effective protection and realization. And yet, UN reports, including the most recent one that we presented to the Human Rights Council earlier this year, highlight pervasive, violent abuse, harassment and discrimination affecting lesbian, gay, bisexual, transgender (LGBT) and intersex persons in all regions of the world. They tell of the sadistic murders of lesbian, gay, bisexual and transgender persons, horrific rapes of lesbian and bisexual women, violent mob attacks, and the abuse of LGBT persons by police and prison officials. They tell of LGBT and intersex persons fleeing death threats in their countries of origin only to be discriminated against in the asylum process. (16)

Let us advocate for laws and policies that will protect everyone’s dignity. Let us work for a world where all people can enjoy their rights fully. 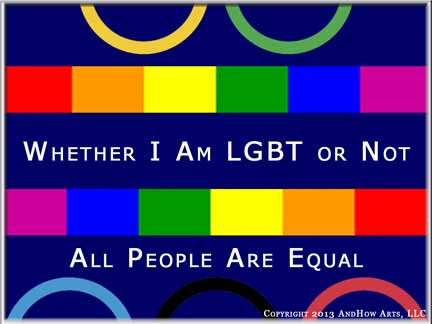 You may also like
Images
References
current-affairs shocking social-issues