Our history text books in school teach us that Ashoka was a great emperor, that he was the first ruler to spread his messages via inscriptions, that he fought the Kalinga War in Orissa and after witnessing the violence and death of lakhs of people he was filled with remorse, became a pious and non-violent Buddhist and spread Buddhism. [Note 1]

All these are lies, whatever we are taught in school and colleges about benevolence of Ashoka are lies, except the part about the mindless violence and genocide in Kalinga. I have shared some stories and lesser known facts about Ashoka in this essay. It uses the same texts and inscriptions that traditional historians use to fabricate the myth of Ashoka the Great.

To summarize, in the words of Sanjiv Sanyal, "As one can see, Ashoka does not look like such a great king on closer inspection but as a cruel and unpopular usurper who presided over the disintegration of a large and well-functioning empire."

Below I present an excerpt on Ashoka from a typical NCERT text book taught to impressionable young children in Indian schools today. Even a cursory reading will reveal the anti-Hindu bias and communist/socialist/welfare state undertone of the text.

Ashoka - The Emperor who Gave up War

"Ashoka’s dhamma did not involve worship of a god, or performance of a sacrifice. He felt that just as a father tries to teach his children, he had a duty to instruct his subjects. He was also inspired by the teachings of the Buddha.

There were a number of problems that troubled him. People in the empire followed different religions, and this sometimes led to conflict. Animals were sacrificed. Slaves and servants were ill treated. Besides, there were quarrels in families and amongst neighbours. Ashoka felt it was his
duty to solve these problems. So, he appointed officials, known as the dhamma mahamatta who went from place to place teaching people about dhamma."

It is not surprising that Nehru being a socialist wrote: "His edicts (instructions) still speak to us in a language we can understand and we can still learn much from them."

Ashoka's Hell was an elaborate torture chamber disguised as a beautiful and attractive palace full of amenities such as exclusive baths and decorated with flowers, fruit trees and ornaments built by King Ashoka (304–232 BCE) in Pataliputra (modern Patna, India), the capital city of the Maurya Empire. 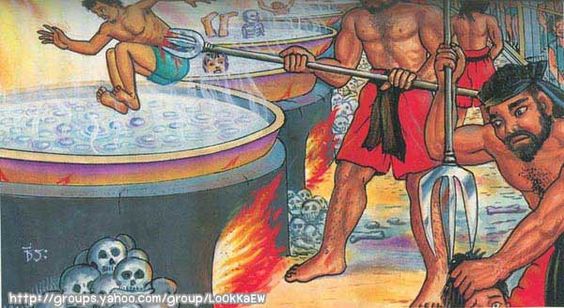 Note 3 - Selling Human Head
A few days later, Ashoka called his ministers and told them that he required the heads of different types of animals. Knowing his violent temper (he had executed many ministers in the past) they did not ask him why he wanted these but each of them quickly went about procuring the type of head specified by Ashoka. Yashas was asked to bring a human head.

When all the ministers had obtained the heads, Ashoka asked them to sell these in the market. Soon they had all succeeded except Yashas, who found that none would buy it. He was told, thereupon, to give it away. Yet, none would accept it even free. Yashas came back, crestfallen, to report:

O King, the heads of cattle, asses, deer, birds –
all were sold for a price to buyers;
but none would take this worthless human head,
even free of charge.

Ashoka asked Yashas, “Why is it that no one will accept this human head?” “Because,” answered Yashas, “it disgusted them.” Ashoka asked him whether people found this particular head disgusting or all human heads. Yashas replied, “All human heads they find disgusting.” “What!” exclaimed the king “is my head disgusting too?” After much hesitation and at the insistence of Ashoka, Yashas finally answered, “ Yes.” Now Ashoka explained to him the intention behind this baffling exercise:

If I acquire some merit
by bowing down a head so disgusting
that none on earth would take it.
what harm is there?

That's it. Thank you for reading 28 Shocking Facts about Ashoka. Please show your appreciation by sharing and/or leaving a comment.
history shocking