Conversations with a Reverend 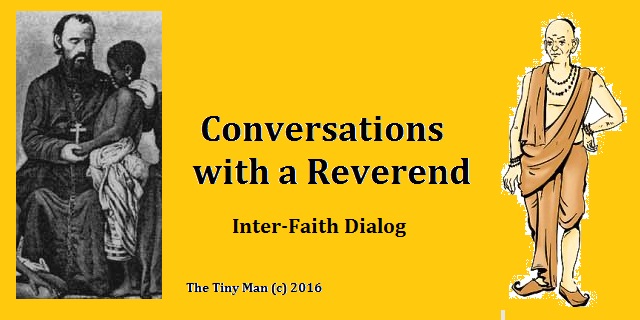 I recently had a wonderful debate with an Evangelical Reverend and I present below a trasncript of the talk titled "Conversations with a Reverend".

In response to an article titled "Sheldon Pollock Doesn’t Know What He Is Talking About: ‘Free Will’ Is A Christian Idea, Not An Indic One", by Smt Divya Jhingran I had made a comment. A discussion started among the Dharmic people, when suddenly we felt a non-Dharmic presence within us, a user with a Handle Ergo, who was later identified as an Evangelical Reverend. Let us call him Ergo Reverend Joe. He responded to my comment, I responded back, and we had a wonderful discussion, which I present below. Some other folks also commented which I am not mentioning.

By its very definition, an atheist is one who has rejected the Abrahamic notion of exclusivist monotheism. Shri Sheldon Pollock, similar to his ideological-guru Marx, were all Christian-atheists. Their ideas of atheism is inter-twined with Christian thought - and this aspect pervades their thought-process and influences their world-view, and it is through this lens that they view non-Abrahamic cultures.

IMHO Christianity can progress only if they give up Christ, admit they made a mistake and move on.

Ergo Reverend Joe:
Whatever, if atheism all over the world holds that there is no God and the concept of God is pure imagination of man, can there be any difference between a western atheist or eastern atheist? The said core is sufficient to unite all atheists and it ends there. Everything else is like a husk of a coconut. Detach and discard it. To be an atheist is an intellectual position and, when that position is put in practice in one's life, say by not having any picture of god, or refusing to go to temple, mosque or church, where is the question of feeling proud for such a position? Is it a race with theists to win a cup? Hinduism may feel proud to say it embraces atheism also as one of the its strands. Yet, such atheism was accepted as religio-political strategy having seen atheist sects like Buddhism and Jainism emerging as separate religions on their own to challenge Hindu religion in early centuries. If you can't beat them, join them. Atheism today is plain refusal to accept the existence of God. There is no christian or Hindu atheism today. You are almost saying that the a Christian atheist denies Christian God and will accept Hindu God and an Indian atheist denies Hindi God and will accept Christian God. Not only laughable logic, but also insulting atheists.

Me:
There is also something called monism (pure, qualified, or dualism) as opposed to Theism, which is an integral part of Hinduism, in fact I would go so far and say that is the Crux of Hinduism.

That is why I as a Hindu can proudly say "I am Brahman" (Aham Brahmasmi), and why a Christian or a Muslim will be persecuted if he says that.

Ergo Reverend Joe:
You don't get me correctly. I am not talking about poly or mono theism. Whether it is poly or mono, it is still a faith in a Supreme Almighty. It is, in other words, Theism. I am talking about atheism. Non belief in God. There is no God. God is a fiction created by man. All this is atheism. Whether it makes sense to you or not, the atheists dont bother about that. For them, it makes sense. They also call the believers idiots. Please tell me whether Hindu religion accepts a man like E V Ramasamy who propagated these three lines: THERE IS NO GOD THERE IS NO GOD THERE IS NO GOD HE WHO TAUGHT US THAT THERE IS GOD, IS A FOOL. (i wrote thrice. because he repeated it thrice. It is written on the stone under his statues all over Tamil Nadu. Now tell me Hindu religion accepts him as a Hindu?

Me:
Of course there is no monotheistic God. That is what we've all been saying. God, an external All-Mighty supreme force or whatever, who created the Universe, who will punish you yadda yadda is a pure Abrahamic construct. That's why, and rightly so, they have atheists.
Keyword: External God

There is however, ONLY God, as per almost ALL strands of Hindu thought. Hindus gave up exclusivist monotheism during Rig Vedic period itself. After that it has been monism and its variants only.
Keyword: All-pervading Truth called Brahman/ Paramasiva (in Kashmir Saivism)/ Mahavishnu in Pancaratra of which you are a part, of which we all are a part.

If you deny Brahman or Mahavisnu or Paramasiva, you are denying yourself. But I am sure you will not follow,since you have never bothered to read a SINGLE Hindu text in your life.

Ergo Reverend Joe:
If it gives up Christ, it no longer exists as Christianity. Where is the question or progress and moving on?

Me:
Where is any progress now with Christ?

Ergo Reverend Joe:
I mean when there is no Christianity as a religion, there is no logic to discuss about that religion. No one talks about an entity which does not exist.

Ergo Reverend Joe:
Sir, miracle's dont exist - yet Vatican grants sainthood. They talk about an entity (like miraculously curing cancer) which does not exist. An entire Faith system with billions of followers exist based on the imagination of St Paul and his fantastic tales of a mythical Jesus, yet people talk about it. The bigger question is whether one chooses Reason and Intellect or Superstition and anti-Intellect Rhetoric. I Sir, choose Evolution and Big Bang Theory. I do not believe I was born a sinner and hence require no deliverance. As a Hindu, I am born divine, and my good news was the day I heard the sared mantra AUM. Peace be Upon You, Brother!

Ergo Reverend Joe:
I have written on it in Mother Teresa thread. Some choose reason, some mere faith. Vatican granting sainthood does not affect us, Hindus. How does it affect you? It may affect a Roman Catholic if she believes MT is a fake.

That's it. Hope you enjoyed it.

That's it. Thank you for reading Conversations with a Reverend. Please show your appreciation by sharing and/or leaving a comment.
current-affairs