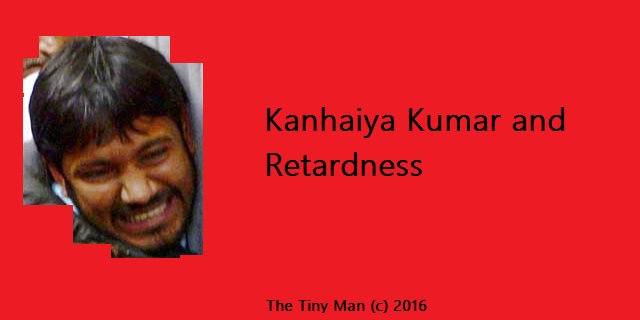 In this article I will share my views on Kanhaiya Kumar and Retardness that is part of the main-stream Left-orientation of most government Education institutes.

That communism is a failed ideology and that it is one of the biggest frauds perpetuated on mankind does not deter the modern day retards (or students if you will) from espousing its tenets and filling education institutions with its poison. However to be fair, the rot is deep and was started long back. See this article which exposes how communists had a 20-25 years time period to wreck the education system. Today the true communists are gone and instead Jihadists and Vatican have taken up the job of sabotaging India.


Kanhaiya Kumar is a rabid anti-Brahmin anti-Hindu hardliner. He has demanded extermination of Brahmins like me ("Brahmanvaad se Azaadi"). The law should take strict action against hate-mongers like Kanhiaya Kumar who want to wipe out a minority community (Brahmins are less than 5% of India). Hate-mongers and Brahmin-bashers are always in great demand. It has been happening for millennia - first it was the Charvakas, then the Islamo-facists gay genocidal maniacs, then pedophile Christian priests/ missionaries and now self-probing communists (CPI, Maoists).

Brahmins are less than 5% of India and have historically been a minority, and incidentally amongst the most un-warring categories. Yet anti-Indian forces eternity wet their pants and want Brahmins to be exterminated ("Brahmanvaad se Azaadi") as the dickhead loser Kanhaiya proudly says. The law should take note and put all racist sloganeers (commies, Afzal supporters, Azadi demanders) behind bars and then do what Ajay Devgn says in Gangajal "ragad do saalon ko".

Some people insist that India "is a weak country because it's people are weak and will never unite to fight any enemy internal or external. Foreigner llike Sonia leading a country of 1.25B for 10 years by controlling a dummy head like MMS. British rule did not teach us anything. Pandering to religious minorities for vote. Mughal rule did not teach us anything. There is no unifying theme in India, unlike most other well to do countiries. Division and infighting is in our DNA. The day we vote without looking at caste or religion we will start India's path to greatness. Until then we have Rahul, Kejri, Lallu, Mamata etc..."

That is all bogus. Caste system is a myth, it was and continues to be a ploy to denigrate Hindus. We had varnas and jatis, and there is NOT even one recorded inter-varna or inter-jati riot, except minor skirmishes. The earliest recorded one is that of Parshurama exterminating some Kshatriya families.

Caste system was formalized by British Lord Risley in 1800 for census.

We have been made to think that caste is an issue. The real issue has been the destruction of traditional Indian systems by British colonialism and Nehruvian socialism which has completely wiped out Indic ethos.

The real issue is that Hindus are suffering from inferiority-complex and ashamed to say that they are Hindus. All achievements have apparently come from the West and all bad things are Hindu - and the well-orchestrated media reminds us time and again of rape, caste system and such bull-shit. Fact: America has more rapes per capita that India - 100x more. We have been brainwashed to a degree unimaginable.

"Hume chahiye azadi, Brahmanbad se azadi. Manubad se azadi. Lad ke lenge azadi." said Kanhaiya. The only thing you will get Kanhaiya is a boot up your back-side once you go to jail. That is the only Azadi the Brahmin-hater will get.

I am afraid. That Kanhaiya Kumar is a dickhead.

That's it. Thank you for reading Kanhaiya Kumar and Retardness. Please show your appreciation by sharing and/or leaving a comment.
current-affairs