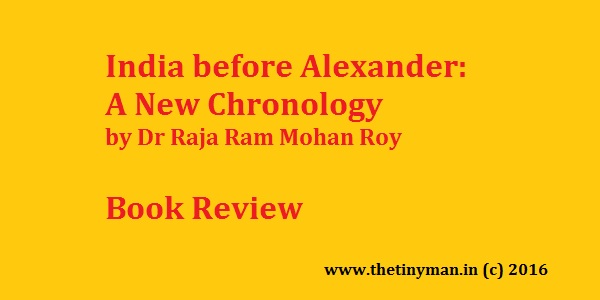 India before Alexander: A New Chronology

by Dr Raja Ram Mohan Roy is an excellent book which takes a scientific re-look at Indian chronology.

Personally for me it has cleared a lot of the colonial cob-webs of Indian history. I was doing some research on Devanampriya Priyadarshi vis-a-vis Ashoka and came across his articles in IndiaFacts. I read all his published essays and then decided to read all his books (via Kindle Unlimited).

The author very convincingly demonstrates that Indian history and its chronology that is currently taught (a legacy of Colonial education and Nehruvian Leftism) is quite different from events which actually happened and which may be with some efforts reconstructed from literary, archaeology and comparative sources. And that is what he has done. Very convincingly.

Our current curricula has force-fitted facts into a set of hypotheses, thereby creating unwanted distortions. What are these hypotheses?
a. Hindu civilization is ancient but not very ancient, it cannot be
b. Hindus did not have any historical sense and did not record anything
c. Hindus were poor in math and astronomy

Whatever evidence fits this hypothesis is kept, anything else is automatically rejected as myth or lack of historical sense. Therefore false synchronims are created, kings go missing and actual events are called fables.

Based on these 2 questionable identifications, entire edifice of Indian history has been constructed. The end results is very late dates to many events. The other is how to explain obvious discrepancies - like 2 dynasties claiming to rule the same place at the same time, which again is because of false synchronims. Another outcome, is the complete dismissal of genuine historical personages like Vikramaditya and dubbing them "fictitious".

By current chronology, Adi Shankaracharya is believed to have lived around 750 CE. He provides a review of almost all contemporary religious belief systems during his time. Yet he is suspiciously quiet about both Christianity and Islam, which by that time would have definitely reached Kerala where he was born. This is a strange and peculiar issue which nobody seems to be able to explain.

However all these issues are resolved when Sanrokottos is identified as Chandragupta of the Imperial Guptas and Devanampriya Priyadarshi as Kumaragupta I. In this scheme, Adi Shankara would have lived a few centuries earlier to mythical Jesus Christ.

The author tries to right all these wrongs by providing this alternate framework, which while definitely brilliant and novel, is at the same time in line with our traditional accounts and dates. His work is detailed, meticulous and evidence-based, which is what one would expect from a scientist.

It is a must-read especially for Indians to know their ancient historical tradition and what kind of distortions have crept in.

Dr Raja Ram Mohan Roy is a Research Scientist and Project Manager based out of Canada and did his n Materials Science and Engineering from The Ohio State University, USA.

That's it. Thank you for reading India before Alexander: A New Chronology - Book Review. Please show your appreciation by sharing and/or leaving a comment.
book review current-affairs