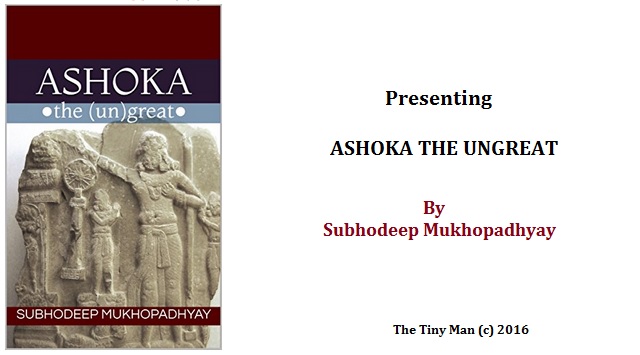 On this auspicious occasion of Vishvakarma Puja, I would like to announce the release of my new book "Ashoka the Ungreat".

Ashoka is said to be one of the greatest emperors in India who gave up violence after the Kalinga War. He spread peace, encouraged religious tolerance and did monumental social work. Today Ashoka is a popular figure in school history books, in Bollywood movies, in TV serials and among our leaders.

But 200 years ago no one in India knew Ashoka. At best he was an insignificant king like thousand's of kings in India's long history. The British popularized him. Jawaharlal Nehru turned Ashoka into an iconic figure. Our history books post-1970 made Ashoka an everyday figure.

Why did they do so? How much do we actually know about him? Who was Ashoka really?
I make the case, based on a plethora of evidence that Ashoka was not what he is portrayed to be, and most of what we know about him are fabrications.

I present, "Ashoka the Ungreat".

Ashoka Maurya. A great king. Master strategist. A legend. The inheritor of the greatest kingdom in Indian-subcontinent. One war, the bloody Kalinga War, however changes him forever. He makes a clean break with the past. Ashoka gives up Hinduism. He gives up war. He embraces Buddhism. He becomes a humanist. A messenger of peace and religious tolerance. This is what we are taught in schools and colleges. But how much of this is really true?

We worship Rama. We venerate Krishna. Our country is named after King Bharat. We recall Mandhatri when we talk of the old. We talk of Yudhistira's truthfulness. Bhima's strength. Arjuna's valor. Vikramaditya, Chandragupta, Raja Bhoja, Prithviraj Chauhan, Shivaji, Maharana Pratap, Guru Gobind Singh. They are our heroes. They are a part of our daily lives. Ashoka is not. We never talk about Ashoka conversationally. Our ancestors never talked about Ashoka. Ashoka was forgotten and unknown in India till the 19th century when the British popularized him. Later Pandit Jawaharlal Nehru, eminent historians of Delhi, Shah Rukh Khan of Bollywood and others made him even more popular.

Subhodeep Mukhopadhyay delves into this Ashoka-industry and its massive propaganda. He undertakes a critical, unbiased and apolitical re-reading of Ashokan rock edicts, Buddhist sources like Ashokavadana and Mahavamsa and findings from latest cutting-edge research in Ashoka and Buddhist studies. He presents a radically different picture by joining the dots and taking all the available evidence to its logical conclusion. It becomes apparent that far from being an epitome of rationality and secularism, Ashoka was a ruthless tyrant and a religious fanatic, and much of what we know about him are mere fabrications.

This book is about the life and times of Ashoka the Ungreat.