My Advice to Hindu Atheists 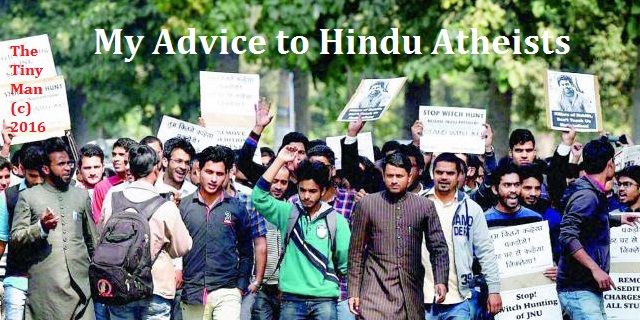 You are ignorant fools, I am sorry to say. You Hindu atheists know nothing about religion in general and less than zero about Hinduism. Let me explain why I say so, but I am sure that you will not understand and will unnecessarily argue and waste my time.

Atheism
- An atheist is one who rejects the monotheistic notion of monotheism.
- An atheist does not believe in external God and that a some bullshit God created the world
- More specifically an atheist can ONLY be a an ex-Jew, an ex-Christian or an ex-Muslim


Conclusion: Only an ignorant Hindu will say he is an atheist. Its like saying that you are a vegetarian beef-eater.

Monism
- Monism is the believe in one ALL-PERVADING truth (known as Brahman)
- No internal/ external difference
- No creator/ created difference
- NO external God
- Hinduism is essentially monist
- There is no question of atheism in Hinduism because there is no God like Christians and Muslims
- We have Devas and Devis, which is NOT the same as God
- Each Deva/ Devi represents a specific ASPECT OF NATURE (like wealth, knowledge etc)

Suggestion to Hindu AtheistsRead about Hinduism before making sweeping comments. You need some basic level of intelligence to understand Hindu philosophy.

So when you decide to debate with me, give me facts - no big statements and uneducated guesses.