India has to help Herself because no one else will 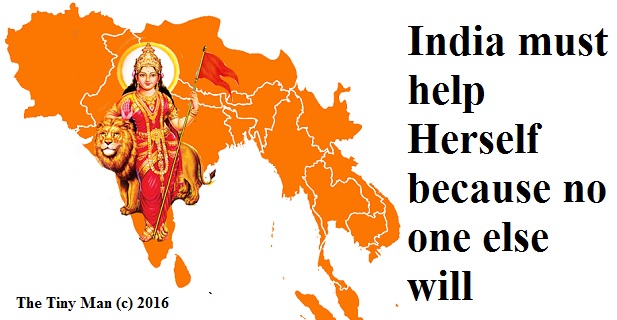 Today India is alone. The US has said that it does not consider or intend to declare Pakistan a 'terrorist state'. Instead the US has called for a "meaningful dialogue" between India and Pakistan to resolve Kashmir issue. The fact remains that Pakistan has no moral or legal claim on Kashmir, and has illegally occupied a portion of Kashmir. We should have told US to mind its own business. Over and above that our politicians do not have the guts or the knowledge to question US about human rights violation of blacks, genocide of native Americans and American-occupied Texas (yes Texas was a part of Mexico).

The writing on the war is clear. US will not help India. Never. Neither will Russia nor Israel nor France or for that matter any one else, as many people believe. India has to help herself out of the mess that India herself has created.

Pakistan is a terrorist state. Yet we extended our hands of friendship.
Pakistan is a rogue state. Yet we said Aman ki Asha.
Pakistan sent us terrorists and Jihadis. Yet we accepted their artists.
Pakistan is a minnow compared to India on all social and econmic frony. Yet we treat Pakistan as an equal.
Pakistan is an Islamic state which treats Hindus worse than mad animals. Yet Hindus in Hindu majority India have refused to accept this bitter truth.
Pakistan views Hindus as kafirs who only desreve to be exetrminated in Jihad. Yet to the same Pakistanis, Indians have given red carpet welcome in so-called people to people contact program in Delhi.
Pakistan wants to destroy us with a 1000 cuts. Yet we want, or think we want to give them love.

An assertive Hindu India over the last 60 years, solidly tackling militant Islam and dealing with Pakistan as the terrorist state that it is, would have resulted in a different world order. Instead starting from Nehru to Sonia-Manmohan, we had a confused secularist, Muslim appeasing, morally pretentious,self-hating and weak Indian-Hindu identity, and the world believes we are a coward. That is the truth.
We could not help our own Hindu brothers in Kashmir, why will anyone help us fight terrorism. We could not prevent the genocide of Kahsmiri Pandiits by Kahsmiri Muslims in the 1990s.

People only help the strong, not the weak. All this bluster of BJP must go - it has to do what it promised. Doval-ji must deliver what people expect from him - 4 pieces of Pakistan. BJP should stop this nonsense of development - nobody is buying it, especially as long as Arun Jaitley is at the helm of affairs, with his fiscal deficit and 2% inflation story bullshit, when dal is Rs 150 and potatoes are Rs 24.

There is an old saying in Rig Veda - Let me be so hard, that people are compelled to look at me like friends. Our political class has ensured that we have lost our hardness.

I repeat. No one will help us. India has to help herself by asserting a strong Hindu identity and breaking up Pakistan somehow. It can start by building a grand Ram Temple in Ayodhya. It will be a symbolic victory and may kickstart the nascent Hindu awakening that we are seeing now.

Hinduism must spread again to all corners of the world if we want eternal world peace and super-progress.