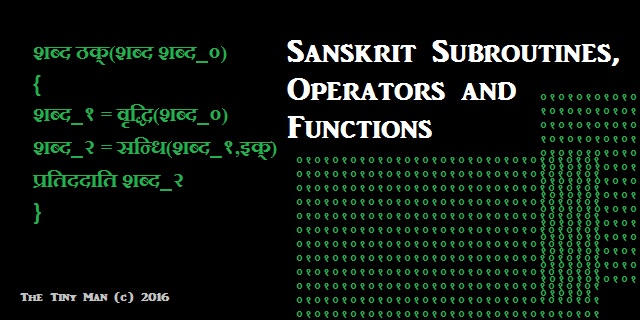 Sanskrit is a fascinating language, and as a computer programmer I am amazed by the sophistication of Sanskrit grammar.

For example, a typical computer function or subroutine in C, Java, or VBA has an input, a body and an output. Functions can be reused, called from each other and abstracted if required, especially in object oriented languages. With this computer programming framework in place, softwares deal with everything from mobile apps to rocket launch.

In the same way, since the last 3000 years Sanskrit grammar has been using such sophisticated operators and more. Most of us were simply not equipped enough to appreciate Panini's ultra sophisticated methods.

Let me illustrate with an example, which probably only computer programmers will understand. There is a pratyaya called ठक् which transforms a शब्द to a वृद्धि form with इक् appended after suitable सन्धि.

where वृद्धि and सन्धि are themselves functions.

Such is the greatness of Sanskrit and such was the sophistication of Panini and other Sanskrit grammarians. It gives me great sadness when people who have not studied Sanskrit, abuse and vilify this great unifying force, and I hope that more people delve into Sanskrit with seriousness to enable advanced sophisticated knowledge for the progress of mankind.