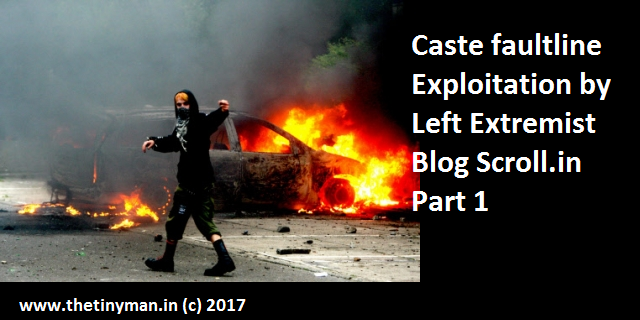 Scroll.in is a left extremist blog which publishes various articles on the so-called ills of Hindu and Indian society. Scroll.in is a heavily funded foreign blogsite with native writers and the type of narratives they weave and stories they craft, are part of a larger strategy for "Breaking India".

Being a left extremist blog, Scroll.in indulges in extreme prejudicial reporting and displays rabid Indophobia (deep-seated hatred for Indian society) and Hinduphobia (revulsion for Hindu civilization). In order to further their anti-India agenda, Scroll.in has hired a large number of writers who
- display and promote virulent and rabid anti-Hinduism and
- who posses strong grasp of English language and the elitist jargon and idioms of so-called left-liberalism

Scroll.in as a part of its left-extremist Breaking India project, selectively reports and crafts narratives on specific themes like:
This series will deal with one specific theme, namely how Scroll.in exploits Caste Fault-lines to weaken Hindu civil society (the Right) on the one hand, and to sow the field for the Left, whether they be Naxalites, Christian fundamentalists or Islamic hardliners.

A Matter of Last Name

In 2014, a lawyer from Bihar, Shri Siddhanath Sharma filed a case against his son to stop using his last name, as his son had married outside his community. It was a simple matter using legal means where no one was threatened, injured, or killed and the Rule of the Land was followed to the letter. But leftist leaning authors of Scroll.in gave the entire incident a Hindu social-issue/ human rights issue.

Let us take each point, one by one.

1. Changing the issue from marrying outside the community to marrying "a lower caste woman"
Since Brahmins are at the top of the rung in the British created caste system, any marriage outside a Brahmin community has to be with someone at a lower rung. For example, if someone gets first rank in an exam, then others obviously have to be lower ranked. Or it is like saying that, alleged gay Mughal empire Babur loved his non-royal lover Babri (of Babri Masjid fame), and then qualifying it by adding that Babur loved his commoner/ servile lower class lover Babri. It is obvious, does not serve any purpose and intentionally confuses the matter.

2. Invoking the caste of the person
Shri Siddha Nath Sharma, the faher himself, according to Scroll.in claims that "by marrying outside their caste, his son has not only hurt him, but damaged his social reputation." He is worried about marriage taking place outside his community - he never alludes to caste hierarchy or talks about lower caste. Converting every trivial incident in Hindu society and giving it a caste angle is a hall-mark of left-extremism in India as practiced by the likes of India-hating Scroll.in's English speaking foreign educated elitist writers and story-tellers.

Who is Father Philip Manthra? He is signatory to the now defunct anti-BJP website pheku.in to expose Narendra Modi's "authoritarianism" and "his deeply communal record". Father Philip Manthra is associated with People’s Union for Civil Liberties in Bihar.(2) What is the People's Union for Civil Liberties? It is a group with stated and well-documented anti-India actions like:
- condemning the hanging of anti-India Islamic terrorist, Afzal Guru (3)
- supporting Kashmiri Islamic separatists (4)

In fact the issue of chauvinism and bigotry is actually a global problem and has nothing to do with Hinduism.


a.  Christians in India
Malayali Christians are strictly against inter-religion and inter-caste marriage. Yes even Christians have caste system. This is well-documented in popular culture and Tamil film Vinnaithaandi Varuvaayaa (2010), about the love story of a Tamil Hindu boy and a Malayali Christain girl, clearly highlights the limits to which Malayalam Christians will go to prevent outside community marriage. In the end, the female protagonist finally marries a person from her own Christian community. (5)

b. Muslims in India
In Muslim families of India, honor killing is very common. For example in 2011, Newly-weds Zahida, 19, and Husna, 26, were strangled by their mothers, for marrying Hindus. (6) In 2016, a Muslim mother, Bibi Jan killed her 17-year-old daughter by smothering her to death using a pillow, for talking to her Hindu neighbor. There is a plethora of data to support that honor killing is very common among Muslims in India and over 91% of honor killings worldwide are Islamic. (8). Phyllis Chesler of New York Post writes about Indian Muslims that "honor killings are triggered by ... developing non-Muslim friends, having a non-Muslim boyfriend.. etc." (7)

In fact it is commendable that Siddhanath Sharma, resorted to legal means and not to force or honor killing which is more common among the Christian and Muslim communities in India.

You may also like:
Is God a Racist Misogynistic Homophobic Genocidal Maniac and Terrorist?
9 Shameful Tactics of church to convert to Christianity
Islamic Fundamentalism in West Bengal - Curated List of All Incidents
Mughal Barbarism and Islamic Savagery in India
Joshua Project and Christian Terrorism
christianity current-affairs islam shocking social-issues