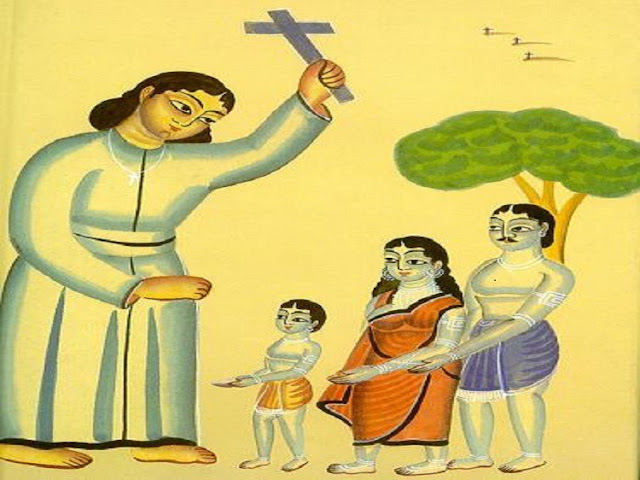 A far bigger threat than radical Islam in Bengal is the threat of underground Christianity.
I can't say about rest of Kolkata, but in Saltlake I have been noticing for the past 6-8 months, that a HUGE chunk of the economically poor lower caste people have converted to Christianity, after being enticed with 1. school fees/ books for children 2. medical costs of mothers 3. construction jobs for males and 4. initiation fee of Rs 8000/- or so, by a relatively new Keshtopur based church (the old church shut down, I heard).
To give you an idea of the magnitude, today in Saltlake, these people form about 40% of the demographic (others: Bengali Hindus - 30%, Marwaris - 13%, Biharis/ Eastern UP - 5%, Others - 2%, Illegal Bangladeshi Muslims - 10%) and normally contribute to Pujas and other social activities - which they are already distancing themselves from like stopping evening sandhya/ conch shell calls and instead wearing Jesus lockets.
Our maid threw away the sinni (naivedyam) of a Satyanarayan Puja, complaining that it had gone bad - my parents unsuspectingly accepted the explanation, all though why it would go bad for her alone is a mystery when other's had it. But having spent 5+ years in Hyderabad, I remembered how converted Christians would throw away or spit on Tirupathi prasadam, and I could relate.
Worse is that they continue to remain Hindus for reservation benefits, and drain our economy - and thus the crypto-Christian population of at least Saltlake is quite high. Our local elders, the liberal brigade and others, continue to remain blissfully ignorant and unwilling to listen dubbing it a typical "Hinutva rant".
Shall write on this in detail after I compile some more data - but this nonsense must stop.
shocking