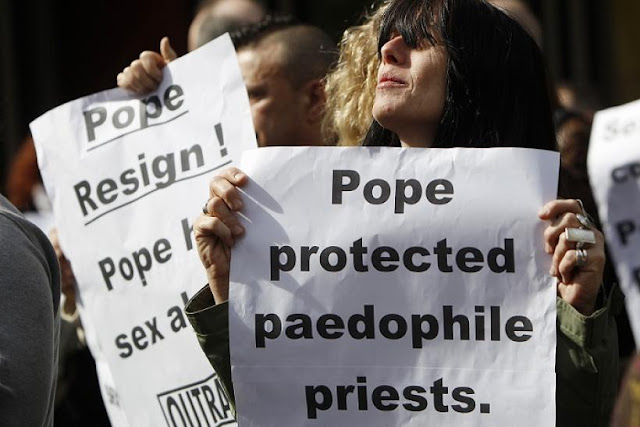 In this article, I take the analysis forward and try to analyze if there is a link between rape culture and religion. I start with Christianity since it is the world's biggest religion, with about 2.4 billion followers worldwide or 33% of the global population, making up a majority of the population in about two-thirds of the countries in the world[i]. Later we will focus on Islam, Judaism, Bahai and other religious denominations.

Please note that this essay is NOT a criticism of any religion or theology, but rather an analysis of how power structures inherent in religion lead to a "rape culture".

We have seen a lot of examples in the west of sexual offences in churches. These also include numerous cases of abuse against young children. A US Grand Jury report published in August 2018 says[ii]:
“Despite some institutional reform, individual leaders of the church have largely escaped public accountability Priests were raping little boys and girls, and the men of God who were responsible for them not only did nothing; they hid it all. For decades.”

In October 2018, a law firm released a report containing the names of 212 Catholic Clergy members accused of sexual misconduct in the Bay Area of USA[iii]. The report[iv], compiled by lawyers from Jeff Anderson and Associates based in St. Paul, Minn., accuses 135 offenders from the Archdiocese of San Francisco, 95 from the Diocese of Oakland and 33 from the Diocese of San Jose.

In September 2018 a confidential study commissioned by the German Bishops conference reported that German priests sexually abused 3,677 minors between 1946 and 2014. It found that 1,670 clerics and priests from 27 German dioceses were involved in the abuse, that the victims were mostly young males, and that the majority were under the age of 13 when they were abused[v].

According to a Grand Jury report released in August 2018, more than 300 “predator priests” were found to have committed sexual abuse in Pennsylvania, harming more than 1,000 children. In painful detail, it showcases how for decades one of the most powerful Catholic churches in the world hid the abuse and suffering of children. The incidents described include Church priests who[vi]:

According to Catholic Feminist Kimberly Carfore, the attitude which is displayed in the nuclear family (that it is natural the male is the dominant breadwinner) perpetuates attitudes which support rape culture.  The “nuclear family” she says, has roots in the Bible and structuring families where male dominance (i.e. the male breadwinner) is considered normal and natural might actually reinforce rape culture in society[vii].

Many US politicians also endorse the view that pedophilia is natural and trace it to the Bible. In June 2018, Michigan State Senate candidate Mike Saari argued that men being attracted to 12-year-old girls is normal because it’s in the Bible. He said[xi]:

“"Woman don’t seem to understand that from the very beginning of time men have taken young girls (Prior to periods) as wives and concubines. Even the bible talks of this so don’t make it sound like men that are attracted to 12 year old girls are sick… it’s you woman that can’t get a grip on reality is whats sick… "”

The Pope himself has admitted: “The heart-wrenching pain of these victims, which cries out to heaven, was long ignored, kept quiet or silenced… With shame and repentance, we acknowledge … that we did not act in a timely manner”[viii]. However except for this letter, the Vatican has appeared to stall and instead issued platitudes.

In fact forgiveness of pedophile Church Fathers has now become the norm rather than exception. In New York region, many churches held a "Mass of forgiveness". Bishop Ronald Gainer with the Diocese of Harrisburg joined a list of Roman Catholic clergy to pray and ask for forgiveness. Gainer, who is named in the report, is accused of reaching out to the Vatican to protect two of the priests accused of abuse[ix].

With the advent of Christianity in India, this culture has taken roots and grown exponentially especially in the last five decades when a huge amount of religious conversion took place. In 2017, a 48-year-old Christian priest in Kerala Father Robin Vadakkanchery of Catholic Church of the Diocese of Mananthavady (Wayanad) in Kannur district, confessed to raping the 16-year-old girl and subsequently impregnating her. The Father raped the girl multiple times in his room, when she visited the church for prayer mass. The rape victim gave birth to a baby boy on February 7 at a private hospital in Kannur[x]. There are any such cases which have been reported in recent times.

Sexual misconduct in church and rape culture of a society seem to have a strong unidirectional top-down link. It is perhaps the combination of patriarchal nuclear family rooted in Bible and zero accountability of accused Church Priests/ Fathers that this culture of sexual exploitation of the weak (including women and children) permeates to the rest of society. It is akin to sort of a religious sanction: “if a Priest can do it and get away with it, so can I” and that perhaps becomes the dominant male thinking. Unfortunately this rape culture rooted in Church has also found its way in India through local churches where we find numerous instances of gross sexual misconduct and abuse, including harassment of victims, disappearance and murder of whistle-blowers.