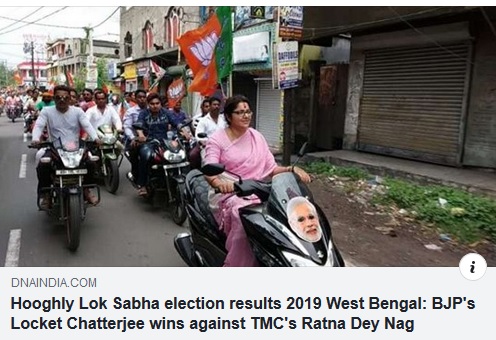 Locket Chatterjee won the Hooghly seat in West Bengal 2019 Gerenral elections by defeating TMC candidate Ratna De with a margin of 70,000 votes. How did BJP achieve an unlikely win in Hooghly district? In hindsight it was bound to happen.

My ancestral home is in Chandernagore in Hooghly district. Although I personally have been anti-CPIM/ anti-Congress since my birth, almost every member of my family, para-protibeshi and almost everyone I knew, sided with CPIM. A few were Congress supporters. A distant relative of mine was in fact a Left Union Leader. Red flags used to be everywhere.

We used to have many fights on BJP/ RSS's supposed sampradayik rajniti and so on. All my warnings about demographic changes, population jihad and shankha-laghu tushtikaran fell on deaf ears. They called it an RSS conspiracy - toder Amit Shah egulo koracche.

So how did red become saffron?

But even before that, let me go back to the past and narrate an incident 50 years ago, which will set the context.

It was in 1970s. A very popular temple then (and even today to some extent) was Barai Chandi Mandir. The Mandir had been managed by a reputed Brahmin family for generations. Suddenly misfortune struck the family one day. A Muslim man named Babu (even today many Muslims have Hindu nicknames) pretending to be a Hindu wooed the daughter of the Chief Purohit and then kidnapped, converted and forcefully married her. Locals were shocked - they complained to the authorities. But nothing happened - because the perpetrator was a Muslim.

Thus what is today called "Love Jihad" is something old and familiar to people of our locality. This action merely reinforced the old notion that outsiders (especially Muslims) were not to be trusted.

Cut to the present. Around 2015-2016, two Halal meat shops suddenly came up opposite a Shiva Mandir (Baba Panchanan). Local people petitioned and complained to the authorities under TMC - but they pointblank refused and the locals were told that Muslim shops could NOT be touched under any circumstances. Soon a large number of Muslim shops backed by TMC illegally came up on GT road - to which local businessmen objected. Again no action was taken.

A conservative Hindu para like ours, with an old memory of love jihad, suddenly started seeing a huge influx of Arab-dressed dari-wala Muzzies who started taking houses on rent and paid huge amounts of money. Unimaginable amounts like 10k-20k rents were being paid - which locals gladly accepted. The outsiders included Bangladeshi, Bihari and other very radicalized Bengali Muslims.

Soon people noticed strange activities in the Muzzie households - suspicious closed door meetings, physical trainings on roof-tops, and huge gatherings of people and perhaps some suspect bomb-making factories. Some suspected that they were perhaps ISIS sleeper cells hiding in Hindu localities to evade the authorities. The atmosphere soon changed and relatively safe localities started being considered unsafe what with large groups of skull-cap people huddling on road-sides. Thievery, pick-pocketing, snatching and eve-teasing increased.

Also on rise in parallel was TMC goond-gardi - which reached heights see only during Naxal movement. A non-political acquaintance of ours was thrashed in public daylight after being stripped naked by outsiders and by people he knew - why? Because one of his relatives spoke out against the appeasement and rising goondagardi.

All this violence finally culminated in a number of Hindu-Muslim riots in Chandannagar (unbelievable as it may sound) where Hindu shops and establishments were burned. But NO mainstream media reported this. Some referred to it as a gang-war. Others called it an RSS conspiracy to destroy Bengals secular fabric.

It was this incident which was the tipping point.

This is a story from just one locality. I am sure each locality has its own similar story to tell.

When survival is at stake, people forget lofty ideals and ideologies. This is what happened in Hooghly. All said and done, BJP might not be pro-Hindu (it is definitely not) - yet if anybody can tackle the menace of rising jihadi extremism and cross-border influx, it is BJP. This was the belief.

Seems people of Hooghly district converted their belief into conviction and voted for Locket Chatterjee.